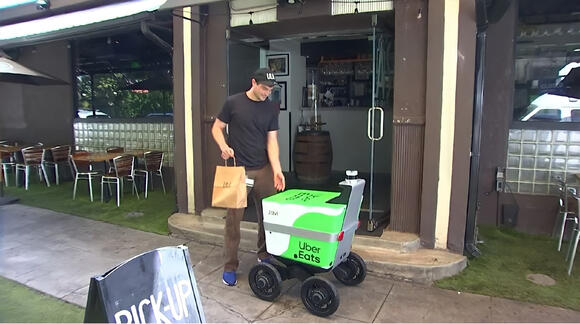 Uber Eats have teamed up with Serve Robotics to bring cutting-edge robots to the streets of California, where thousands of consumers order delivery every day.

Serve Robotics is a San Francisco driverless technology business that is presently deploying its robots to deliver food in California.

At the moment, the robots are covering Hollywood and West Hollywood, with hopes to expand soon to the rest of California and the country.

The partnership was announced a few months ago, and now they finally started the new delivery method.

Pilots at Serve Robotics’ headquarters use a video game controller to steer the robot across the neighborhood, making sure it stays on the pavement.

The spokesperson said the robots are out in the world on their own, they know what’s going on around them, and they know how to get from point A to point B.

Customers can recognize their robots since each one has a unique name.

The spokesperson mentioned they feel that knowing whose robot is carrying the food makes it easier for their restaurants and retail partners, as well as the consumers.

It’s similar to hailing an Uber driver and saying, OK, that’s my Uber driver’s name, and this is their registration plate.

All people need to know about the robots is their names.

An Uber Autonomous, Mobility, and Delivery team member, stated this is something they’ve been working on for a long time.

Their main focus is to serve the merchants and their customers, and in order to do that, they need to build a more robust marketplace, and they believe autonomous vehicles serve that purpose very well.

Just to have a more powerful, more reliable marketplace where people can more easily and reliably get their food, and merchants can get their products directly to their customers.

One of the restaurants experimenting with this new robotic delivery is LALA’s in Los Angeles.

Many consumers are eager to test the new delivery method, while others wonder if it will really work better than the traditional methods that use people to fulfil the deliveries. What do you think?