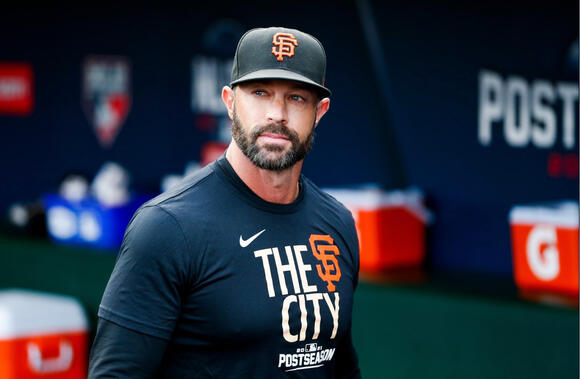 Gabe Kapler prefers to write down his ideas — or type them out on a computer screen — before expressing them publicly, and that’s how the San Francisco Giants manager revealed his choice to stand for the national anthem on Memorial Day.

Kapler’s protest started Friday when he announced that during the national anthem at baseball games, he would stay in the clubhouse in protest of the country’s lack of response to the school tragedy in Texas.

“I don’t plan on coming out for the anthem going forward until I feel better about the direction of our country,” he said.

Kapler tweeted a link to his blog post on his reaction earlier Friday, saying he regretted not adopting any kind of protest — such as kneeling — on the night of the tragedy.

Kapler penned a four-paragraph essay on Monday outlining why he will stand for the anthem at Citizens Bank Park instead of continuing his protest against the country’s lack of better gun legislation by remaining in the clubhouse during national anthems.

Kapler remarked in the dugout hours before the first pitch, “I’m going to come out tonight.”

“I spent a little time thinking about this and talking to some people around the game and also some veterans and some people who are invested in gun control. I wrote a little bit about it just to make sure I had my thoughts well formulated.”

Kapler wouldn’t reveal his plans for national anthems beyond Monday, but he was adamant about standing on the foul line with the players and coaches on Monday.

“Those who serve in our military, and especially those who have paid the ultimate price for our rights and freedoms, deserve that acknowledgment and respect, and I am honored to stand on the line today to show mine.”

Kapler pledged to donate on Memorial Day to Everytown for Gun Safety and Heart & Armor, both of which are devoted to safeguarding veterans’ health and connecting civilians to the experience of military service.

He explained both are organizations he firmly believes in and thinks they are both worth a click and a look to see if others think they are worthy of funding as he does.

Kapler has been involved with both groups for the last year, according to him.

“Voicing concerns thoughtfully and protesting peacefully are both patriotic actions; so is supporting organizations that are in the weeds solving problems,” he wrote in his blog.

Kapler has returned to Philadelphia, where he managed for two seasons before joining the Giants.

“Everyone has a choice in this country,” his successor, Joe Girardi, said of Kapler’s protests on Monday.

Girardi said America was created on this principle and he will not make that call.

In response to the different comments and reactions to his choice, Kapler said he recognizes these are controversial subjects, and he’s not surprised at all since “anything that sparks thoughtful conversation is good.”