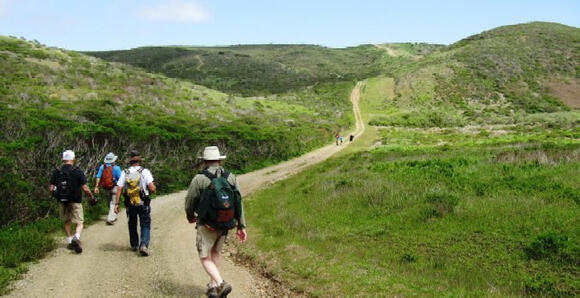 Local hikers have long wished for a continuous hiking trail that circumnavigates the whole area, connecting the hills that surround San Francisco and San Pablo Bay.

Even while only approximately 70% of the planned 550-mile Bay Area Ridge Trail route is built, there is plenty to pique the interest of adventurers, some of them are already hiking and bicycling as much as they can.

William Penn Mott Jr., who had led public lands agencies in the East Bay for 40 years and subsequently led the National Park Service, suggested the route in the 1980s.

Mott envisioned a mega park system based on a trail network that would crisscross the Bay Area and connect the area by pathways all the way to the Sierra crest, among other concepts.

Stringing a massive hiking circuit across nine counties in a metro region with a population of almost 8 million people is easier said than done.

The trail council has collaborated with more than 70 land management organizations, as well as municipal governments and private property owners.

The council has acquired new land in San Jose, along Skyline Boulevard in San Mateo County, and a single mile in the hills above Napa Valley during the last year. The council plans to lock in a total of 400 miles by the end of the year.

A bird’s-eye image reveals an 80-mile circle with an uninterrupted length linking the Santa Cruz Mountains to Mount Tam through the Golden Gate Bridge and a 45-mile segment following the East Bay hills.

However, in both Napa and Santa Clara counties, tiny holes break the path, and significant pieces are missing. The council performed a gap study last year, which revealed 152 gaps in the planned path.

The overwhelming bulk of the existing route, 92 percent to be precise goes through parks, open spaces, and other public areas where obtaining permission for a hiking trail is quite simple.

However, almost half of the remaining 150 miles would travel across private property.

Pieces that travel past ancient ranches, for example, where people roaming about uninvited and unsupervised may not be welcomed.

Private property owners and land trusts have consented to allow trail groups under the supervision of a docent or an authorized hiking guide in some areas.

Only since 2006 has Napa, the county with the fewest finished trails had a designated open space district working to preserve and maintain public resources.

Although the trail committee updated the path there seven years ago, it remains difficult. Imagine attempting to navigate your way across Wine Country, where good open space is scarce and property may fetch hundreds of thousands of dollars per acre.

In Santa Clara, most of the planned routes would also travel through private land.

The construction of an inner loop that runs through the heart of San Jose is almost complete.

However, a more appealing scenic path connecting county parks along the ridges that encircle Morgan Hill and Gilroy are still a ways off, according to McBride, partly due to a regional initiative to establish wildlife corridors in the area.

Getting over roads and freeways is another story. Highway 17 bifurcates, for example, a section that planners want to secure through Los Gatos. There is talk of constructing a wildlife overcrossing that would also welcome hikers.

The current trail has its own pleasures, even with all of the breaks.

It offers breathtaking views of the bay. All along the route, public lands have feeder trails that provide easy access to the main branch.

Hikers, mountain bikers, and equestrians may use several parts of the trail. BART stations provide easy access to parts of Orinda, Castro Valley, and San Jose.

On the route north to the Golden Gate, the trail through San Francisco takes hikers over Mount Sutro and through coffee shops.