L.A. man climbs on top of church and sets fire to cross 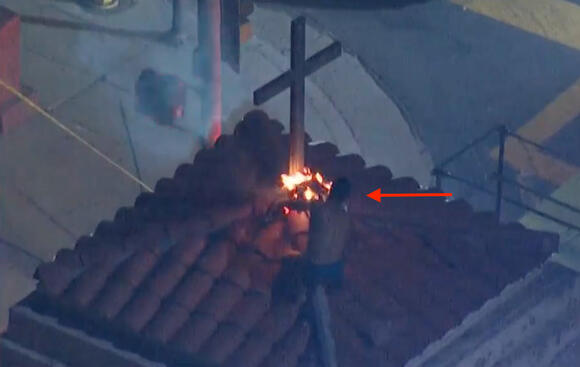 The man after starting the fire.Twitter

Authorities arrested a suspect after an overhead video showed a man lighting fire to a cross atop a church in Boyle Heights on Wednesday night.

The Los Angeles Fire Department stated in an alert that firefighters and police were on the scene outside St. Mary’s Catholic Church at 407 S. Chicago St. around 8:25 p.m.

“LAFD is on scene with LAPD at a four story building with an adult male on the roof. The person appears to be trying to light the building on fire. LAFD Air Ops are responding to provide a visual on his actions” The alert said.

When reporters arrived at the scene, the suspect, who seemed to be wearing just boxers and socks, was on top of a bell tower attempting to ignite a fire. The flames, however, did not extend beyond the peak of the roof.

He finally climbed the scaffolding around the tower soon after 9 p.m., going over the main top of the church before leaping to other roofs in the area. He was even spotted climbing an electrical line at one point.

The man’s activities were being tracked by police, and soon after 10 p.m., a suspect was apprehended outside a residential complex.

According to the LAFD, paramedics then took the suspect to the hospital. It wasn’t apparent if he needed therapy or was being assessed.

Officials from the fire department remained at the church late Wednesday night, and an arson investigation was ongoing.

For Mia Rippa, a Boyle Heights resident, the incident shows how the current affairs have left people in need of mental health support.

“I was in my house and I heard the helicopters flying around, when I found out what was going on I couldn’t help but feel sorry for the man. He is probably someone who has struggled during the past year and simply reached a breaking point after the hard times we’ve all been living.”

“This is exactly why the government needs to focus part of their homeless plans and budget towards mental health, you cannot simply take someone out of the streets if they’re not in the right mindset,” she said.