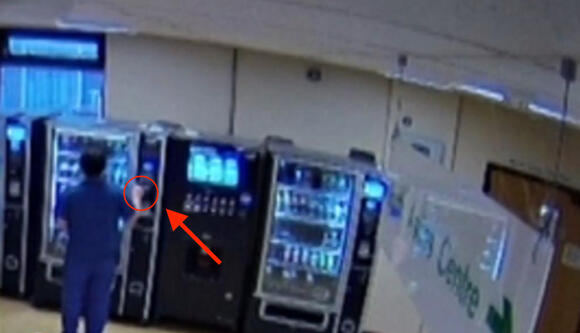 The nurse using the patient's card.WMP

A healthcare worker in a Covid ward who authorities say stole a deceased patient’s bank card to purchase snacks and candy was sentenced to suspended prison.

Police said the nurse grabbed the 83-year-old woman’s card after she died at the hospital she was in.

Cameras caught her as she approached the vending machine and made six consecutive transactions using contactless payment.

According to court records, she used the card 17 minutes after the time of death was reported.

The woman, 23, previously confessed to theft and fraud by false representation.

According to investigators, she used the card to make six $1.40 transactions on the hospital’s vending machine using the contactless pad.

The nurse made a similar purchase later that day and attempted it twice more when she returned to work the following days.

The card, however, had been canceled by then according to the police, and she was caught during her shift with the card still in her hands.

Officers said she claimed she discovered it and mistook it for her own card, but they were different colors, and she disregarded hospital policies about patient lost property.

Investigators said the actions of the woman represent an “abhorrent breach of trust” that had disturbed the victim’s family.

They explained that the family was dealing with the loss of a loved one from Covid when they discovered the bank card was gone.

The nurse was immediately suspended from her duties, according to a hospital’s spokesman.

He expressed his condolences and apologies to the patient’s family, called the behavior “disgraceful,” and said she would face disciplinary action.

Many users supported the nurse, arguing that if health care workers were paid fairly, situations like this wouldn’t happen:

“Maybe we should pay people a livable wage and they wouldn’t have to resort to stealing from the dead to feed themselves,” one person said.

“She bought a bag of chips not a [Louis Vuitton] bag, the family will get that $1.50 back, this is a desperate act, and i’d be willing to bet there was an underlying reason for doing this. Being a nurse right now is awful, this woman needed some chips! Let her eat!”

Others condemned the woman’s actions, calling it an unjustified act:

“Let me just say… as a director of nursing she would never work in healthcare again. I would shred the license in front of her. I have done it before and wouldn’t hesitate to do it again.” Another user commented.