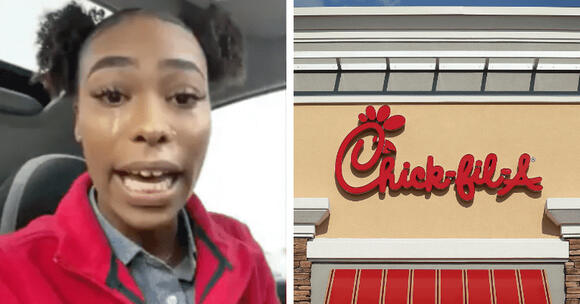 In a popular Twitter video, a former Black Chick-fil-A employee, explains why she felt discriminated against while working at one of the fast-food chain’s locations.

She shared a video captioned “i worked at Chick fila and today I quit. here is a summary as to why,” from her Twitter username @anisahkyera. The video has over 6 million views since it was posted on May 13. It has received over 289,000 likes and has been retweeted 78,000 times.

In the video, the lady, dressed in a red uniform with her Chick-fil-A name tag on the right, goes on a rampage, claiming, “There was a man who touched me inappropriately. I tried to go somewhere else.”

The video does not identify the location of the shop where she works. She also did not fully identify the individual she alleges of harassing her while she was working.

She seems to have captured it in the immediate aftermath of the occurrence. She went on to state that she was directed to talk with the location’s “operator.” “He just tried to fire me for calmly vocalizing how I felt,” she says, revealing the name of the operator of the location was “Don”.

She went on to say that the operator’s wife worked at the site as well, and that “they both have made it very clear they don’t like me.”

When she reportedly informed the operator that she “wanted to talk to him,” he reportedly replied, “Yeah, before it’s too late.” “In the middle of me talking, he said, ‘Are you done? ’Cause, you have done nothing but criticize. How long have you worked for Chick-fil-A? You’re bringing down the employees who have been here for 20 years. You’ve done nothing but walk in here with an attitude,” she remembers him telling her.

She then went on to identify what she believed to be the fundamental problem. “I think the problem is… I’m a Black woman, and I vocalize my issues,” she said.

The woman then questioned Chick-fil-A’s reputation for having friendly employees and a pleasant work atmosphere. “If anybody thinks Chick-fil-A is the best company, I just say, do not work at this one,” she said at the end of the video.

“Thanks to you who have been sharing. hopefully this encourages you guys to speak up for yourselves as well. love always,” she tweeted after her video got millions of views and thousands of shares.

On May 14, the worker asked her followers to “please refrain from sending threats towards anyone involved.”

She also said, “it has been a crazy 48 hrs to say the least. I do want you all to know that I see your messages and the stories you are sharing. I’m glad that me spreading awareness opened room for many of you to confide in me/others with your stories bc I know they’re difficult to share.”

“I appreciate all of the love you guys have shown, especially because I see my black community uniting & standing with me during this time. as of now, I’m really still wrapping my head around my situation, so I plan to take time to find the best steps to help me move forward… I do not condone or associate with that kind of behavior. just wanted to spread awareness,” she said in a series of tweets.

Social media users couldn’t help but notice the change in Google reviews for certain Chick-fil-A restaurants, as many of them seemed to be supporting the woman’s video with bizarre anecdotes of how they were treated when they visited the chain's restaurants.

Chick-fil-A has not issued any comments regarding the incident.