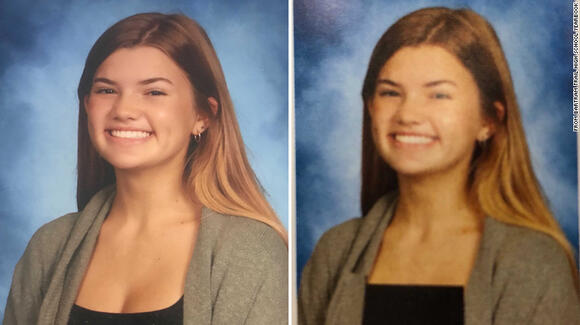 A Florida high school is under fire for changing the yearbook images of 80 female students in order to add clothes on their chests and shoulders.

The school district informed local media that the alterations were done to ensure that the images were aligned with the dress code, which requires girls’ shirts to be “modest.”

However, opponents cited yearbook photographs of male students that were left untouched despite breaking the same rules.

According to the students, the digital adjustments were conducted without their authorization.

The yearbook coordinator at Bartram Trail High School, a female teacher, decided to modify the images after concluding they violated the dress code, according to the St Johns County school system.

A disclaimer on the Bartram Trail website informs students that their yearbook images may be digitally modified to adjust to the dress code.

However, some students have found the changes upsetting and have accused the school of sexism.

“The double standard in the yearbook is more so that they looked at our body and thought just a little bit of skin showing was [innapropiate],” Riley O’Keefe, a 15-year-old Bartram Trail student, told CBS station WJAX News.

“But then they looked at the boys, for the swim team photos and other sports photos and thought that was fine, and that’s really upsetting and uncomfortable.”

According to WJAX, the district’s former policy was to eliminate any images that violated the dress code, and this year’s modifications were made to ensure that all students were featured.

Following the backlash, Bartram Trail, a government-run high school with around 2,500 students in Jacksonville, has announced that it would provide refunds for the $100 yearbook to parents who are dissatisfied with the alterations.

According to the district’s dress code for the 2020–2021 school year, girls’ tops and blouses “must cover the entire shoulder” and be “modest and not revealing or distracting.” “Excessive make-up” is not authorized, and all students are not authorized to have “extreme haircuts.”

The dress code is enforced differently at different schools depending on the district.

The execution of these restrictions at Bartram Trail sparked local outrage earlier this year when 31 students got dress code infraction notes in a single day.

Several female students, aged 15 to 16, reported they were ordered to unzip their sweaters and coats in front of teachers and other students, revealing tank tops and bras beneath.

Riley responded by starting an online petition to reform the clothing code, which she claims is clearly [only focus on] young women.” With the code hitting national news once again, the petition has surpassed 5,000 signatures, a lot of them from L.A. County students who could relate to the situation.

Dress regulations in the United States have been criticized in recent years, with some claiming that they are enforced in ways that humiliate young women and girls about their bodies.

The National Women’s Law Center conducted a survey in Washington, DC, in 2018 and discovered that black girls and students with curvier bodies were disproportionately targeted.

Stephanie Fabre, Riley’s mother, said in an interview that the event brought attention to something that wasn’t an issue to begin with.

“Nobody would have looked at that yearbook and looked at these pictures and thought anything of them other than they were beautiful ninth graders,” she adds.

“Some of these edits have drawn mass bullying and emotional stress on some of these girls, because their pictures were so poorly photoshopped that they’re being used as memes now and circulating on Snapchat, and that’s horrible.”

Ms. Fabre went on to say that some families want the school to apologize, modify the clothing code, and reprint the yearbooks with the original images.

However, not all parents are in violation of the guidelines. Rachel D’aquin, another Bartram mother, told WJAX that she approved of the changes.

“If parents aren’t teaching at home how daughters should dress and dress decently, then the school has to parent.”

Riley hopes that, in addition to changing the dress code, the school would educate the staff and male students.

“I hope they teach the boys that there’s nothing wrong with our body,” she said. “It’s natural, just like theirs. There’s no reason why our body should have to be censored and theirs are OK.”