Details on Newsom's $116.5 million scheme to get everyone in California vaccinated 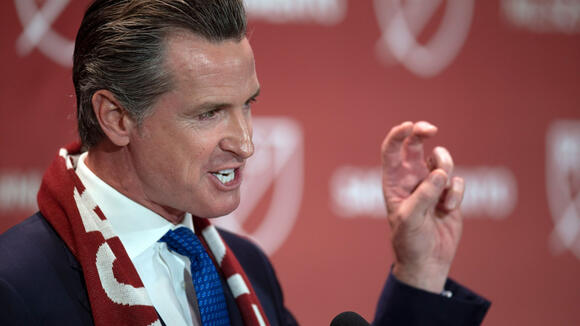 In the newest and most unprecedented attempt yet to increase California’s dwindling COVID-19 immunization rates, state authorities revealed on Thursday what looks to be the nation’s greatest inoculation incentive: the opportunity for ten residents to win $1.5 million each.

The purpose of the multimillion-dollar gift is straightforward: to provide people with every conceivable incentive to finally roll up their sleeves as the state’s vaccination rollout approaches its critical next phase.

These rewards, as well as 30 other $50,000 rewards, are eligible to California residents who have received at least one dosage.

According to state authorities, those who have already had their vaccines will be automatically placed into the draws, and there is no need to register.

“These are real incentives. These are an opportunity to say thank you to those not only seeking to get vaccinated as we move forward but also those that have been vaccinated since we first availed those opportunities a number of months ago,” Gov. Gavin Newsom said Thursday.

If someone under the age of 18 wins, the money will be placed in a savings account until they become 18.

Furthermore, beginning Thursday, the next 2 million people who begin and complete their COVID-19 vaccine will be automatically eligible for either a $50 prepaid gift card or a $50 grocery card redeemable at supermarkets such as Ralphs, Food 4 Less, Albertsons, Vons, Pavilions, Safeway, and Andronico’s.

Prospective awardees may refuse the prize or accept and stay anonymous, however, they are allowed to make their award public, according to Newsom.

All California citizens, regardless of immigration status, are eligible, with certain limitations, such as persons who are jailed and certain government employees, such as those working for public health agencies and the California State Lottery.

The overall value of California’s incentive plan, formally termed “Vax for the Win,” is estimated to be $116.5 million.

According to certain statistics, clinicians statewide have provided more than 36.2 million COVID-19 immunizations so far.

Worryingly, many from that number are people who just received their second dose, which has concealed the decline in the number of people starting their immunization regimens, according to Newsom.

With the state now less than three weeks away from its anticipated reopening, authorities believe the time is of importance in ensuring California is protected from any possible transmission surges.

“It’s those first doses, those first shots that are way down, and so you can see that cliff coming in the next week or two,” Newsom said. “And this is what we’re trying to mind and trying to address.”

The money for the vaccine incentive plan would come from California’s general fund, according to a representative for Newsom’s budget.

By next summer, state tax collections are expected to surpass previous predictions by more than $75 billion, enabling the governor and legislature to support a range of projects.

Newsom proposes to use money put aside for pandemic disaster assistance, which will be replenished later with a part of the state’s $27 billion share of federal COVID-19 relief funds recently agreed by Congress and President Biden.

Although the $116.5 million pales in comparison to California’s estimated $267.8 billion budget for the upcoming fiscal year, it is still a sizable sum.

Roughly three times what Newsom’s budget proposes to spend on surge capacity for the California Department of Forestry and Fire Protection during this year’s wildfire season and far more than his budget’s $3 million plan to study the need.

The change to incentives highlights the evolving vaccination campaign, in which demand for doses formerly considerably outstripped availability and those remaining in line are now less keen to receive their vaccinations for a number of reasons.

“If there’s a way to help nudge people who are still just waiting to get vaccinated because it hasn’t been the most convenient time or they haven’t had time to schedule it, we’re hoping that these thank-you gifts remind them how important it is to come in,” said Barbara Ferrer, director of public health for Los Angeles County.

To encourage people to get immunized, the county Department of Public Health has held contests awarding season tickets to the Lakers, Kings, and Galaxy, in addition to more practical inducements such as collaborating with Uber and Lyft to give free round-trip trips.

Ferrer hopes that by providing additional incentives, residents will be more willing to get immunized ahead of June 15, when California will lift coronavirus-related capacity restrictions, rescind physical separation requirements for attendees, customers, and guests at almost all businesses and other institutions, and begin allowing people who are fully vaccinated to go without masks.

The city of Los Angeles isn’t the only one. Residents in the San Joaquin County city of Lodi who got their first dosage on or after May 6 will be eligible for a $25 credit on their power bill after completing their inoculation series, according to authorities.

Long Beach holds daily giveaways for people who have received their initial dosage. Apple AirPods headphones, free hotel stays, and Nintendo Switch gaming systems have all been given away as prizes.

Vaccination appointments have more than quadrupled since the incentive program started earlier this month, according to the city.

In Santa Clara County, authorities last month gave extra rewards for selected adolescents and their families, including the opportunity to tour a locker room at Levi’s Stadium and a $10 Starbucks or Chipotle gift card.

Government agencies aren’t the only ones participating in the prizes. The Hollywood Pantages Theatre is giving away tickets to the popular musical “Hamilton” to individuals who get immunized during a clinic on June 12.

Companies have created their own incentives. For customers who upload their COVID-19 immunization card to their frequent flyer account, United Airlines is giving five grand prizes of one year of free travel to any of the airline’s worldwide locations for themselves and a partner.

Starting June 1, CVS will offer customers who have received or plan to receive a COVID-19 vaccine the opportunity to enter sweepstakes for prizes such as Super Bowl tickets, cruises, a vacation to Bermuda, backstage passes to the iHeartRadio Music Festival, and five cash prizes of $5,000 for family reunions.

There’s also Ohio, which made news with its “Vax-a-Million” lottery program, which gives a handful of $1 million rewards as well as full-ride four-year college scholarships.

According to Andy Slavitt, a top Biden administration counselor on the pandemic, authorities reported a 55 percent rise in vaccination rates among individuals in their 20s, 30s, and 40s in the days after the program’s announcement.

Vaccination lottery plans have also been established in Maryland and Oregon, while certain New York vaccination locations are providing free state lottery scratch-off tickets with a grand prize of $5 million as well as free state park admissions to adults who get their first dose of vaccine.

According to statistics from the federal Centers for Disease Control and Prevention, over two-thirds of all eligible Californians — those over the age of 12 — have had at least one vaccination.

Many specialists believe that at least 80% of the population will need to be vaccinated in order to achieve longer-lasting herd immunity, the point at which enough individuals have been immunized to protect the wider population from the virus.

If spending money is required to achieve that degree of community safety, Newsom added, then be it.