Struggling chef finds success with one of the best online Korean seafood restaurants in L.A. 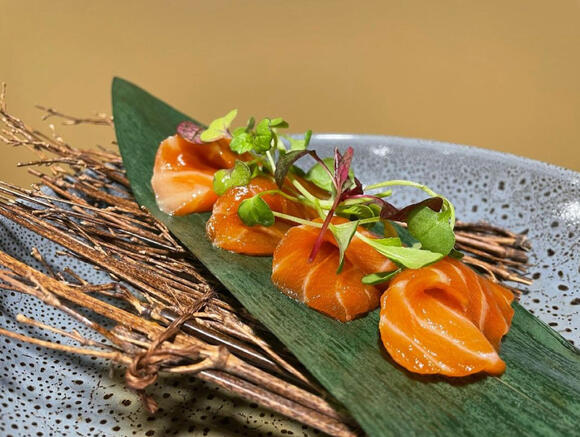 One of the restaurant's plates.Sonsoo Kitchen

As the pandemic struck, the restaurant industry went into survival mode, and husband and wife Ryan Lee and Lucy Row were two of the many Angelenos who hustled to adapt.

Lee was the chef at an izakaya in Koreatown, which was located in the basement of a commercial house. Row owned and run Cafe Lucy, a Santa Monica breakfast and lunch place that catered to the weekday office-worker crowd. Cafe Lucy will shut in March 2020, and Lee, who has worked in Japanese restaurants since 2005, will leave in June.

They came up with an interesting business concept while looking for innovative avenues to raise money: a delivery service for gourmet, ready-to-eat Korean seafood served in Café Lucy’s kitchen. They named it Sonsoo Kitchen — “Sonsoo” means “hand-crafted” in Korean  and launched it in September.

Lee was influenced by companies he saw on the app offering meal packs and photogenic dishes directly to homebound consumers during the early months of lockdown. This business model has become a lifeline for many young startups, helping them to work under lockout conditions while avoiding distribution apps.

Lee lacks the in-person experience of operating in a restaurant, but he appreciates the broader scope Instagram has provided him.

Sonsoo is one of several Korean American-owned restaurants in Southern California that have found and served customers through Instagram. Orders are taken by direct message and are also sent regularly to various pick-up sites in Los Angeles and Orange counties.

Lee decided to start a company that would capitalize on his knowledge of Japanese cuisine, especially sushi and sashimi, and cater to Los Angeles’ huge, hungry Korean consumer base, leveraging the relationships he’d formed as a chef in Koreatown. With his expertise and an urge to make and serve food that was both safe and tasty, he wanted to concentrate on seafood. He spent a month perfecting Sonsoo’s trademark marinade before launching his first products: Korean-style marinated salmon sashimi (yeoneojang) and salmon roe (yeoneoal).

Lee and Row shipped samples and soon began collecting routine orders. Lee returned to the kitchen and extended the selection, first with marinated shrimp, then crab, then abalone, and finally spicy crab. Word of mouth spread quickly — I first heard about Sonsoo from my mum, who saw the salmon and roe in an Instagram photo by one of Lee’s sisters, a lady who once dated my cousin — and by November, business was booming.

Sonsoo has never advertised, and a search for it on Yelp yields no results. Lee and Row are working on a website, but for the time being, it is only accessible through Instagram. Orders are taken over the internet, via instant texting, and via the Korean mobile messaging service KakaoTalk.

Lee buys everything he wants and gets to work in the Cafe Lucy kitchen as he receives the week’s instructions (customer orders range from about 100 to 180 per week). The pair delivers the food themselves; if you place a big enough order, they can come to your house, but they still do weekly drops in a few rotating places across Los Angeles and Orange County.

It’s a bit more complex than browsing Grubhub for Korean cuisine, but Sonsoo Kitchen has been a huge blessing in a year where I ate out zero times and several of my favorite Korean restaurants closed permanently. A bowl of gelatinous raw crab would not babysit my child or put back Jun Won (my beloved Korean restaurant in Koreatown, which has been closed since last summer), but it is a lavish treat that can brighten an entire day. Prices start at $18 for a jar of roe and go up to $25 for generous portions of blue crab and abalone.

Lee gets his seafood from the wholesale fish markets nearby, where he goes at 6 a.m. to get his pick of the inventory. The majority of Sonsoo’s menu consists of fresh seafood that has been gently stored in a soy sauce, or ganjang, marinade, so the consistency of the ingredients is both necessary and obvious.

The buttery and lush Scottish salmon is sashimi-grade. Lee cures it in kombu before brining (an ancient sushi chef trick that removes moisture from the fish, thus intensifying the flavor), and it allows a wonderfully Koreanized sushi meal with a little rice — or better still, a spoonful of plump bursting salmon roe prepared with the same marinade. The raw shrimp in the saewoo jang, or marinated shrimp, are meaty and sweet with a snappy, bouncy firmness, similar to aguachile in Korea.

Sonsoo’s one cooked ingredient is the jeonbokjang, a time-consuming dish of sliced steamed abalone eaten in its shell. Lee utilizes the whole abalone, including the viscera, which several chefs discard. The guts are part of the delicacy for Koreans, smooth with a delicate funk, giving a pleasing contrast to the tenderly muscular, nearly crunchy texture of the rest of the abalone.

Lee’s soy sauce marinade is often used to brine the abalone. This marinade is full of seasoning (I’m not sure what he puts in there, but it swims with garlic, jalapeño, and red chili pepper slivers) but is remarkably mellow, never overpowering the seafood.

But for the yangnyeom gejang, or spicy raw crab, which is rendered with a stronger sauce that is bright red with chili pepper, everything on Sonsoo’s menu uses this marinade. The blue crabs are sliced into strips that are thick with gooey raw ambrosial meat that you can pick out with chopsticks or bite into and drink straight out of the shell.

Both Sonsoo offerings are intended to be consumed cold. Add rice — which has the added bonus of soaking up the marinade — and you’ve got a complete decadent seafood meal ready to go straight out of the fridge. If you’re feeling adventurous, throw in some seaweed, fruits, or something else that sparks your attention,  Sonsoo’s Instagram posts are full of ideas.

Lee and Row are also totally immunized to COVID-19. The pandemic seems to be receding, and restaurants are beginning to reopen, but on a small basis. However, the sector has had a particularly difficult year.