S.F. chef was called a slur and now he's naming his new bagel shop after it 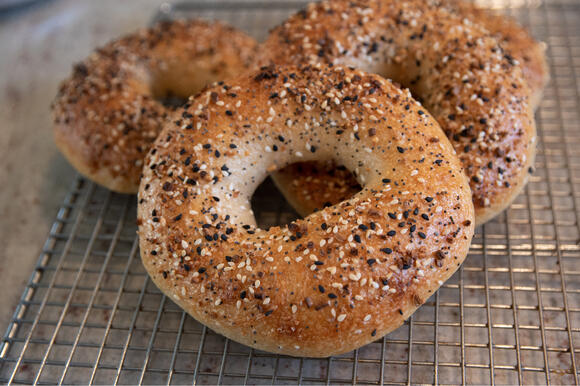 Toscano Brothers, Gemignani’s latest Italian bakery, would house his Dago Bagel. After a recent dispute at one of his North Beach restaurants, he said he picked the brand’s name, a racial insult often directed at people of Italian or Spanish heritage.

He said that a man had harassed him regarding the restaurant’s activities and had screamed the slur at him. He lodged a police complaint, then returned to the kitchen to recover the insulting name.

The popular pizza chef admitted that he knows that not everybody would agree with the term. A food truck with the word in its name was refused a permit to operate in Albany, New York, in 2013. In 2014, the owners of a Mexican restaurant in San Francisco modified the name from Bandidos to Hecho after the Mexican American group called the word derogatory and insulting, recalling that it was used as an insult toward Mexican people in 1930s and 1940s films.

Gemignani, on the other hand, expressed confidence that sharing the tale behind the name would be educational and have a meaningful effect. He intends to put up a sign outside Toscano Brothers with a detailed description, which he would then share on the bakery’s website.

“It’s important to create that awareness, for people to learn and know what that word means and to not to use it in a certain way,” Gemignani said.

Toscano Brothers will open at 728 Vallejo St., between Stockton and Powell drives, on Saturday. Gemignani, the guy behind Tony’s Pizza Napoletana, Capo’s, and Slice House, would concentrate on naturally leavened bagels and sourdough bread.

Gemignani said that he had been working on a bagel idea for months until a recent New York Times article sparked a West Coast-East Coast bagel controversy. His New York-style bagels are chewy and not over-yeasted, and the starter has a hint of rye. They are baked after being cooked in liquid malt. Plain, sesame seed, poppy seed, blueberry, all, Maldon salt, and cinnamon sugar bagels will be open, along with schmears, Nova, and lox as toppings.

Gemignani intends to contribute a portion of bagel profits to the San Francisco Italian Athletic Club Foundation to help celebrate and conserve Italian culture, in part because of the interaction that influenced the name of the store. He also works on the board of trustees for the company.

“I think that there is a lot of hate in this world and it’s pointed at many races, cultures and ethnicities, including the Italians and Italian Americans. It’s a powerful message and one that needs to be shared,” Figone said.

He also hopes that people consider the meaning of the name: “If we only live our lives by the headlines and live on the surface,” Figone said, “it’s only going to continue as business as usual.”

Gemignani’s pizza ideology pervades the whole bakery model. He has long collaborated with Petaluma’s Central Milling Co. to develop flours for his pizzas, which are often produced with sourdough starter. Although North Beach is home to Italian pastry shops and focaccia beloved Liguria Bakery, fresh-baked bread, according to Gemignani, is a “dying breed” in the area.

House-milled grains from Central Milling Co. and a 40-year-old sourdough starter will be used to make Italian country bread with rosemary and black cured olives, sour cherry-chocolate batards, and baguettes at the bakery. Fresh-baked bread can also be used to make Roman-style flatbread pizzas and panini sandwiches with hand-sliced mortadella and prosciutto. Caffe Trieste will provide the coffee.

Beginning in May or June, the bakery intends to offer desserts such as tiramisu, sea salt caramel focaccia bread pudding, and panna cotta.

Toscano Brothers pays homage to the traditional Italian bakeries Gemignani grew up with in Oakland, such as Colombo Baking Company and Toscana Bakery Co. His mother also used their bread to produce French bread pizzas, and new sourdough loaves became a Sunday dinner staple. He and his brother hoped to one day open their own bakery, which inspired the bakery’s name, which also pays homage to Gemignani’s Tuscan roots.

Toscano Brothers will be available from 8 a.m. to 3 p.m. on Thursdays through Sundays, or until all items are sold out.