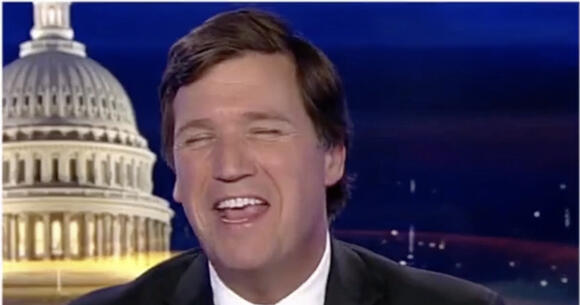 A viral tweet recently alleged that Fox News’ Tucker Carlson instructed his fans to threaten people on the street wearing masks and to “call the police immediately; contact child protective services” if they noticed a child wearing one.

This can not be true many thought and expressed in the replies. Unfortunately to them, it was very much true.

Carlson, who is known for this type of antics in his show, which is filmed in New York, is now attempting to leverage state authority to intimidate and imprison his political opponents.

Carlson articulated his rant with the same blend of shocked outrage, apparent bad faith, and arrogant sarcasm that he is using these days, a fluid mix that renders it hard to tell to what point he’s trolling.

Carlson, just like his fellow conservative Donald Trump, takes pleasure in delivering heinous comments with a serious face and then saying he was just joking. Unlike Trump, Carlson has shown enough of a sense of humor in the past so you can’t rule out the chance.

Trying to find out Carlson’s “real” feelings is not only unlikely, but also irrelevant. Most viewers would hear what he does and treat it positively and literally, whether he is dishonest or crazy.

There are some recent cases of Fox audiences being fooled into accepting his falsehoods, such as ignoring the existence of the pandemic and believing unfounded stories of electoral manipulation in 2020.

Carlson’s rant is a valuable barometer of how American conservatism has evolved, particularly in the Trump age, from a movement that (at least nominally) believes in limited government to one that primarily values using the state’s authority to intimidate those that disagree with it. With Trump out of the picture, Carlson has emerged as the most recognizable face of the modern conservative movement.

While Carlson makes a number of ridiculous statements in this clip, his remarks regarding children are the most upsetting.

Carlson engages in two sporting rhetorical maneuvers after complaining that state-imposed mask mandates are akin to residing in North Korea.

First, he shifts from portraying mask-wearing as unnecessary to violent, and second, he blurs the distinction between a government order and a personal preference.

“As for forcing children to wear masks outside, that should be illegal,” Carlson said. “Your response when you see children wearing masks as they play should be no different from seeing someone beating a kid at Walmart: Call the police immediately; contact child protective services. Keep calling until someone arrives. What you’re looking at is abuse. It’s child abuse, and you’re morally obligated to attempt to prevent it.”

It doesn’t take much thought to figure out where this is heading. Any audience would be moved by Carlson’s perhaps arch exhortations. They will contact the police as well as child protection services.

In certain instances, officials may disregard those requests. In certain circumstances, particularly if callers regularly summon police as Carlson demands, they could be charged with filing false claims; if they are, neither he nor Fox News may be there to assist them.

In such situations, the innocent parents concerned would suffer as a result of the encounters. The news is full of stories of how police officers dispatched to react to minor or even fictitious offenses wind up seriously harming or even murdering people.

Because elected officials refuse to intervene — because, of course, no laws are being broken — supporters of Carlson may feel obligated to take things into their own hands, just like Edgar Maddison Welch, who charged into a Washington, D.C., pizzeria heavily armed in 2016 to deter child violence that he mistakenly thought was happening there.

No one was injured in the attack, but it was entirely possible that anyone may have been. Welch was imprisoned for almost three years.

Carlson’s point isn’t about masks at all. As he reluctantly admitted, the Biden administration has already indicated that new guidelines will shortly make it plain that wearing a mask outdoors is not needed for completely vaccinated people; the CDC issued that guidance this afternoon.

Perhaps the transition should have been more rapid, but conservatives have also praised the deliberate method in governance since it avoids tyranny and harassment of people.

Also with recent guidance, certain citizens will want to wear masks outdoors. Perhaps they are more at ease this way. People practicing excessive care regarding their wellbeing is neither novel nor inconvenient.

Perhaps they have a weakened immune system or have immunocompromised family members or relatives.

What becomes clear is that it is neither Tucker Carlson nor anyone’s problem that they are doing so, as long as they are not harming others.

That is the kind of personal preference that conservatives have historically supported. While Carlson identifies as a supporter of free expression (one of many guises he’s worn over the years), he must understand that the government has no right to tell people what they can and cannot carry.

Unlike laws to wear masks, which are motivated by a public-health concern, a federal regulation that penalizes citizens for wearing masks during a pandemic has little legitimate purpose.

Concerning infants, conservatives have long maintained that families should be able to make parental choices without excessive state intervention.

Carlson, on the other hand, does not object to the state bullying people or wielding excessive power.

He enjoys it as much as the regime is harassing the citizens he despises. This is the guiding principle of the Trump and post-Trump GOP, which prioritizes owning the liberals over everything else — not only rhetorically, but with the government’s fist.

As a result, Trump claimed to have the right to circumvent state and local coronavirus shutdowns (before hastily backtracking when it became clear that he had no such power).

He attempted to include the federal government in college and university policies in attempts to stifle free expression. And he praised police brutality when complaining of being the target of overzealous law enforcement.

It’s easy to see incoherence in Trump’s and Carlson’s arguments: how would they be against the government mandating masks on the grounds of personal liberties but still demand from the government to ban citizens from wearing them? Truly a massive contradiction.