Recall of Gov. Gavin Newsom is opposed by most California voters 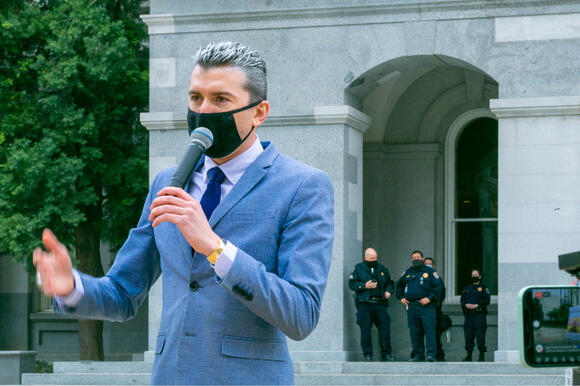 According to a recent survey, most potential California voters will hold Gov. Gavin Newsom in power if a recall referendum were held today. This comes as vaccines in the state rise and the Democratic governor gears up his battle to counter the recall attempt.

According to Mark Baldassare, president of the institute, the findings of the survey, which was conducted March 14–23, represent more Californians starting to see “the light at the end of the tunnel” in the pandemic crisis.

Voters were overwhelmingly divided down party lines, with 79 percent of Republicans supporting the recall and the same proportion of Democrats against it.

The average number of potential voters who advocate dropping Newsom, 40%, is about the same as the percentage of Californians who voted for Republican John Cox in the 2018 gubernatorial election.

Proponents of the recall say they collected more than 2.1 million citizen signatures before the deadline in mid-March. According to certain information provided earlier this month by election authorities, enough signatures would be validated to cause a recall election in the fall. The final results will not be accessible until April 29.

According to Dan Newman, Newsom’s political spokesman, the survey findings show that the recall is a solely ideological ploy done because “Republicans can’t win elections in California.”

According to Newman, the poll findings were broadly consistent with an earlier study, which showed that only around one-third of residents are in favor of a recall.

He also contrasted Newsom’s 53 percent approval rate with likely voters; which stayed relatively unchanged from the last PPIC poll conducted in January and another survey conducted in February 2020 before the pandemic started; to former Gov. Gray Davis’ public standing in the months leading up to his 2003 recall election.

Rescue California, one of the groups endorsing the recall campaign, noticed what it deemed to be promising survey findings on its hand, namely that 42 percent of independent voters and 38 percent of Latinos polled favor a recall.

The survey was administered as more Californians were vaccinated and classrooms started to reopen — all vital facets of the state’s return to normalcy and Newsom’s ability to defeat a recall.

According to the poll, 79 percent of potential voters say the worst part of the pandemic has passed in the United States, a 20-point increase from January.

Approximately 45 percent of potential voters said the state is doing an outstanding or good job of administering the vaccine, while 32 percent said it was decent and 20 percent said it was bad. According to PPIC, the number of people who gave the state high scores for vaccine delivery has risen by 17 percentage points since January.

The governor, who will appear with First Lady Jill Biden at an event in Delano on Wednesday, has continued to tout California’s success, where 17.6 million vaccinations have been delivered to date, though publicly opposing the recall on stops throughout the state.

Newsom’s Democratic partners on the state and national levels have also spoken out against the recall.

When asked last week to discuss the fact that the recall is sponsored by Republicans and some Democrats, Newsom reiterated his campaign’s message that the recall’s origins can be traced back to right-wing parties, although he also admitted that he acknowledges others’ concerns.

Are you in favor of the recall?

A hard time for Halloween lovers. Many will not have much success in the confectionery section this year. Hershey CEO Michele Buck cautioned in prepared remarks about the company’s second-quarter earnings on Thursday that the company will not be able to completely fulfill customer demand for the October holiday.