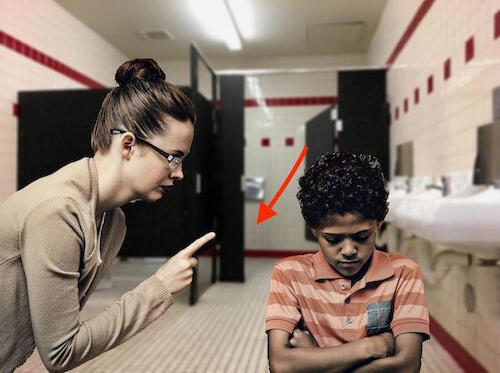 A mother is asking for the dismissal of her 5-year-old son’s kindergarten teacher after he told her he was forced to dig in the toilet with his bare hands.

Ashley Murry, the mom of the child, said as soon as she found out about the incident, she immediately jumped into action. The mom recently said in an interview:

“It’s degrading for a child so I don’t feel like any child should have to go through this,”

“They basically made him go in the toilet and get his feces and the dirty tissue out of the toilet.”

Ashley’s son is a kindergartener at Crystal Hill Elementary School. The second she found out about what happened to her son, she took him out of school and started to fight against this situation.

On March 10th, the school released a statement saying they were starting an investigation:

“Pulaski County Special School District understands the concern and outrage over the incident at Crystal Hill Elementary on Friday, March 5. We take concerns related to the well-being of our students very seriously. The health and safety of all of our students are always a priority. The human resources department continues to investigate the incident to ensure due process is afforded to all involved.”

After all the outrage from the public, the school released a second statement the next day explaining that the process to dismiss the teacher had begun:

“The teacher involved in the incident at Crystal Hill Elementary remains on administrative leave and the District has initiated the legal process under the Arkansas Teacher Fair Dismissal Act to separate the employment relationship with the teacher.” Said the school’s statement.

“This provides the teacher a hearing before the District Board of Directors prior to any final employment action. Since this incident remains a personnel matter, the District cannot comment any further.”

“It is always our best intent to put the safety and well-being of our students as a top priority. The District will work to ensure that its mission of equity and excellence is upheld by all professional staff at all times.”

Ashley said the teacher called her to tell her what happened:

“She got on the phone with me and she said she didn’t have an explanation, she just knew she was wrong. But she stated to the principal that she was trying to teach how not to stop up the toilet”

The mom said that something more than a phone call is needed in a case of this magnitude.

“She needs to be terminated because you don’t treat kids like this. He is a kid.”

Racism in The Classrooms

Last year, The Harvard Gazette interviewed the authors of the book “Unconscious Bias in Schools: A Developmental Approach to Exploring Race and Racism.”

The authors explained that in their experiences as principals in public schools, racism was something they saw all the time.

“It happens all day, every day. It happens in hallways, in classrooms, and throughout the system,” one of the authors said, further explaining:

Black and brown students tend to be redirected for the same behaviors that white students aren’t redirected for; they’re policed more in the classroom, in the hallways, or at recess.

These manifestations happen every day. They are below the conscious level, but it’s something that definitely affects the racial climate of the school building.

On the challenges that school leaders face when talking about race in school, the authors said that the most significant issue is the entitlement to racial comfort, especially among white teachers, principals, academics, and white people at all levels.

They explained that white people have a poor tolerance for racial discomfort and they generally feel awkward talking about race because they just don’t have the experience.

The authors said that the best way to start working on these issues is to understand that this is a lifetime work, it’s just not something that can change from one day to another.

“If school leaders do nothing to address racism in schools, that’d be equivalent to continuing oppression.”