She had her forehead's size reduced and shocked the world 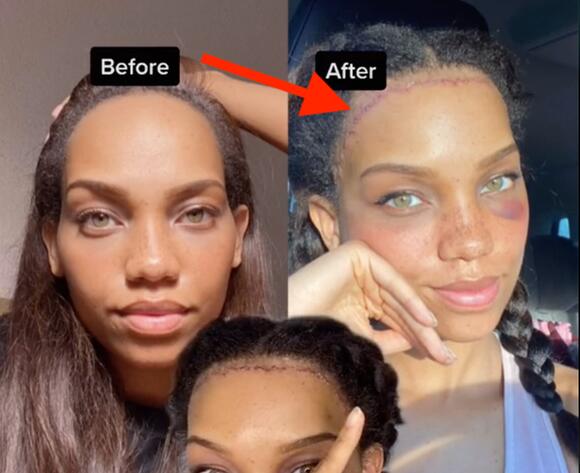 A 26-year old model, Camilla Coleman Brooks, disliked her forehead so much that she actually had a procedure done to reduce its size.

Plastic procedures have become more and more common as people want to feel comfortable and beautiful in their own skin.

The model posted her experience on Instagram and talked about how the procedure was done.

She also shone a light on how uncertain she has always been regarding the size of her forehead, and how she reached this choice following years of diligent consulting.

Camilla explains that she got the procedure done because she wanted this change, she was the one who didn’t like her forehead, no one else ever told her something about it; it was just something she never liked about herself.

The model gave details on how this frontal reduction procedure works.

She explained that the whole procedure takes about two to three hours. They create an incision right at the hairline, and then they raise the scalp a little and see how much they can transfer it, based on the elasticity of the skin. They make another incision so they see how deep down they can pull the hair, and then they cut off the middle section and sew it back up.

For the first two days, the model’s head was covered in bandages that concealed the final result, and a lot of her fans were anxious to see the finished look.

Other people commented that the result ended up looking almost the same, and wondering why she even bothered to have it done at all.

The model replied to those comments saying:

“I keep getting comments like this. Dude, first of all this is all going to grow in, and second of all, if you think it looks the same, that’s fine. I’m the one who stares at my forehead everyday, I know what it looks like.”

She explained that part of the front of her hairline was shaved for the procedure, so when her original hair grows back after some time, the end results will become more visible.

Camilla also explained that her forehead was 8.5cm, but now its size is just 5.5cm from her eyebrows to her hairline.

The procedure cost her around $7k total and it wasn’t very painful, she recalls.

Someone asked her what was the opinion of her husband about her getting this procedure.

The mom of two said this about her husband who she’s been with since they were 15:

“[He] fully supports me getting plastic surgery” because he “knows that I’ve always wanted to get my forehead done.”

The model explains that she’s not bothered by going viral over her cosmetic procedure, saying that she knows her worth and external opinions don’t affect her.

She said to one of her followers that if they feel the same about their forehead and are scared about the procedure, she would just recommend trying to embrace it, pointing also that bangs and hats help a lot.

After a lot of people told her that she should’ve just accepted and loved herself instead of getting the procedure, she said that she does love herself, she finds those comments funny. For her, her body is just “a shell for her soul” and she just decided to change something about it.

She says she’s way happier and mentally healthier now than she’s ever been in her life.

Someone asked her if she would teach her children to embrace their foreheads in case they end up having one like hers.

She said that if they wanted to get any procedure done when they grow, she will support them and let them make the decisions they want about their bodies, as long as they want it for themselves and not because some else is pressuring them to get something done.

The only regret she says she has is not having the procedure done sooner in her life.

What do you think about this type of procedure? Is it something you would go for?