Michigan Polonia Marks 230 years since Europe's first Constitution: "We are not here wasting our time" 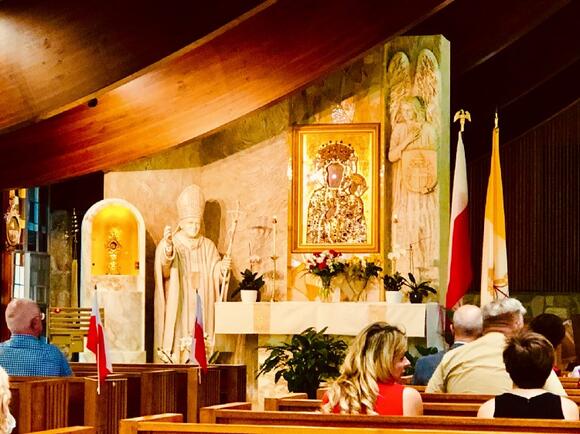 Poles worldwide celebrate a 1791 Constitution that triggered neighboring powers to invade, wiping Poland off the map for 123 years.

Two of the constitution’s authors, Ignacy Potocki and Hugo Kołłątaj, called the document “the last will and testament of the expiring Fatherland.”

Why celebrate a constitution that was in effect for just a year?

Why Poles celebrate May 3

There are 38 million Poles in Poland, but the loss of the 1791 Constitution means another 20 million Poles are spread around the world in a diaspora known as Polonia, including 850,000 in Michigan.

More than 400 Polish-Americans gathered at the Archdiocesan Shrine of St. John Paul in Orchard Lake, Michigan Sunday to celebrate Polish Constitution Day with a Mass, music, and talks.

Attorney Richard Walawender, the honorary consul of Poland in Detroit, said Constitution Day and the accompanying Polonia Day honoring Poles around the world “cements Poland's place in the world of democracies.”

The 1791 Constitution established Poland’s “resolve to stand for freedom and democracy, but it also symbolizes the resolve that the Polish nation would stand up to foreign adversaries.”

Neighboring Russia invaded Poland in 1792. Polish revolutionary Tadeusz Kościuszko, who also led troops in the earlier American Revolution, returned to his native land to lead the Kościuszko Uprising of 1794. Peasants were assembled to join armies fighting for Polish freedom.

As Kościuszko predicted in a letter: “A revolution in Poland would unleash a nation, which, by its topographical position, its kindred spirit, customs, and language, by the armed forces it could muster, would be the only one able to rapidly spread Republicanism through Russia, planting and flowering the tree of liberty, even in the ice of Petersburg.’’ 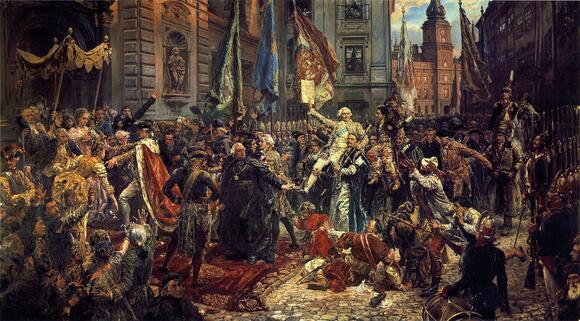 By 1795, Russia, Prussia, and the Astro-Hungary empire jointly “partitioned” the nation for the third and final time, wiping it off the map until 1918 following World War I.

Constitution Day was again banned after Nazi Germany, and then the Soviet Union controlled Poland (who ordered Polish communists to replace May 3 with the communist May Day holiday). Polish rebels marked the banned annual May 3 protests against foreign occupiers.

In June 1989, Poland’s first free elections expelled communist rulers, and Constitution Day was revived as a formal holiday starting in 1990.

Throughout their decades of captivity (1795–1918 and 1939–1989), Poles took Constitution Day and the honoring of past revolutionaries “underground.” The day was celebrated in free Polish communities outside Poland (including Chicago, Detroit, and Hamtramck) starting in the 19th century.

Without a free homeland, 19th century Poles turned to literature and poets who started calling Poland “the Christ of Europe,” a nation that died for Europe’s sins, which would someday rise again.

Poles waged repeated uprisings. A 1797 song, “Poland is Not Yet Lost,” would eventually become a free Poland’s national anthem.

Walwawender said Constitution Day “has served as an inspiration for Poland and Polonia to regain Poland’s freedom from 123 years of subjugation and again from the time of Soviet oppression. So we celebrate and thank God, committing to God, Honor, and our Fatherland.”

Former Michigan Rep. Rocky Raczkowski, R-Troy, the keynote speaker, said, “The U.S. Constitution was the first which said people do not derive their liberty or their freedom from the government but God-given human rights.”

The son of Polish immigrants, Raczkowski said his heart still bleeds red and white, the color of Poland’s flag.

“We are not here wasting our time,” Raczkowski said. “We are here spending valuable time remembering that this document, the 3 May Constitution in Poland, as well as the U.S. Constitution, are documents that were given to us by God. They are documents that preserve freedom and liberty, and may we always have liberty, freedom, and peace for our children.’’

“Poland’s long burial in the 19th century taught Poles to preserve their identity, their language, and their culture even if they didn’t have a state to help them do it,” Grondelski said in a 2018 Orchard Lake talk.

Why does a constitution that lasted just one year matter 230 years later? Grondelski added: “It matters because it’s an example to the world because of what might have been had it survived, because of how its defeat shaped Poland and, by extension, Polonia.”

Walesa to America: ‘This your fate: a God-given role to lead the world’. Lech Walesa, the electrician-turned-revolutionary who became the first freely elected president of post-communist Poland.Image via the the University of Michigan.

DETROIT —  When The Doo Wop Project arrived at Detroit's 103-year-old Orchestra Hall, the fire alarms went off, sending the audience onto the sidewalks waiting for the Fire Department to tell them they were good to go. Soon, everyone was cheering as two Detroit classics combined.

NBC's American Auto Shows Why Hollywood Doesn't Get Detroit, the Midwest or Most of Its Ever-Shrinking Audience

Aretha Franklin Wins New “Respect,” as Her Song Is Ranked the No. 1 Song of All Time by Rolling Stone

Aretha Franklin zooms to new fame: From a new Post Office, to her freeway to a top film and now, the №1 song of all time. Above: a 1968 publicity photo of Aretha FranklinBillboard magazine via Wikimedia Commons.

State of Michigan to Unemployed: Happy Labor Day — Now Get Back to Work

Notices arrived Saturday saying benefits are cut off immediately, the state announced over a holiday weekend devoted to labor, work. On Monday, Labor Day, recipients found they couldn't even collect payments for past-due benefits.Photo by Alevision. co on Unsplash.

Diocese of Lansing Releases Realignment Plan: What Will Catholic Churches Look Like After New Parish Pairings?

Michigan's Lansing Diocese is a global role model for evangelization, but it’s still shrinking in low-growth Rust Belt region. The Diocese of Lansing Realign Resources for Mission committee recently released its recommendations after two years of work.Image courtesy of the Diocese of Lansing.

If Your Car Lease is Expiring, It's Time to 'Use or Lose' Your Unused Miles

Road trips before the end of a lease? More than a third of new vehicles were leased in 2019 —it’s time to use up your miles?. Road trips are soaring as 2019 car leases expire.Image by Free-Photos from Pixabay.

Where it All Began: ‘The Summer of 19 You and Me’ reveals why we keep returning to Myrtle Beach. Grand Strand piers are magnets for visitors throughout the year.Image by Joe Chiaro from Pixabay.

Britney Spears gained fame singing in a Catholic school girl dress: Is she finally converting?. Britney Spears live in concert, 1999.Photo via Wikimedia Commons. God’s sense of humor? In the 1990s, we parents of Millennials got nervous as our pre-teen kids moved from adoring the purple Barney the Dinosaur to liking provocative Britney Spears.

The Return of Coleman Young? Son of Former Mayor Coming to the City-County Building Bearing His Name?

DETROIT — Coleman Young II, one of the top vote-getters in the citywide “at large” City Council primary election, is almost certainly heading toward the City-County Building named for his legendary father.

When your Church says one thing and the polls say another. Speaker Nancy Pelosi with Catholic Bishop Aloysius Jin Luxian after discussing religious freedom in China.Photo via Wikimedia Commons.

When someone dies of COVID, everyone asks, ‘Were they vaccinated?’ Why states should add that key detail to their death tallies. Michigan isn't yet reporting the first question asked after a COVID-19 death: Were they vaccinated?Image by Fernando Zhiminaicela from Pixabay.

ORCHARD LAKE, Mich. — From Ford factory floors to the young men who emulated him at St. Mary’s Prep to executives and clergy who needed his counsel, Tony Koterba always inspired others.

Candice Miller on Flooding: ‘We All Knew It Was Coming’ - What About the Next Storm?

Walking in Memphis at 30

The little known origin of a song that captures the spirit of Memphis. Walking in Memphis just marked its 30th anniversary.Image by StockSnap from Pixabay. “Walking in Memphis.” by Marc Cohn turns 30 this year. It’s always jumped out because it’s so different from the musical world it enters into.