Happily Ever After? How to Feel “In the Club” Rich on the Grand Strand

Why we long to be part of something bigger than ourselves 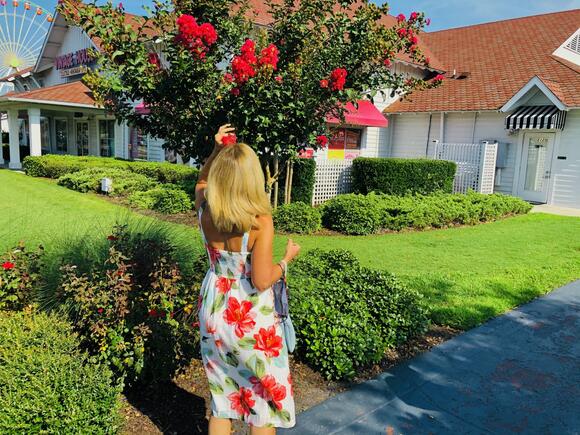 Feeling special yet? The entrance to Broadway at the Beach in Myrtle Beach, South Carolina.Photo by Joseph Serwach.

Hilton Grand Vacation owners get a unique wrist band (different than guests), helping everyone know they are “in the club.”

Such small recognitions make you “feel rich,” part of something bigger than yourself. A growing body of marketing and psychology research shows the need to fit in and “belong” moves people to join — and buy.

The greatest communities — and organizations — often act like clubs. From Costco and Sam’s to Facebook to Peloton to the “frequent traveler” organizations, the “in the club” people are made to feel smart (the buyers who snatched up the best values), “chosen,” and even elite.

“Life’s better with company. Everyone needs a co-pilot,’’ George Clooney explained in 2009's “frequent traveler club,” oriented film, “Up in the Air.”

During the isolated lockdowns of the pandemic and the 2020 protests and riots that followed, the hunger for a meaningful community (joining with like-minded people) grew even more intense. Now it appears in marketing:

The “You Only Live Once” community?

Welcome to the YOLO Economy (You Only Live Once), The New York Times recently declared, citing the rising number of Millennials who decided it was time to “break out” and travel, go places, start their own businesses, do things.

Attorney Brett Williams, who is 33, had his own epiphany after working endless days staring at Zoom. He left his partnership in a big law firm to partner with a neighbor in Orlando, Florida, so he would be able to enjoy his life more and spend more time with his family and community.

“I realized I was sitting at my kitchen counter 10 hours a day feeling miserable,” Williams told the Times. “I haven’t been this excited to go to work in a long time.”

YOLO also has roots in modern music and culture, referencing a popular Drake song from a decade earlier. Grateful Dead drummer Mickey Hart grew his California ranch around the YOLO name going back to 1996.

Peloton soared with the “club to community” concept in 2020

More than a year since many have gone to their gyms, Peloton exploded during the lockdowns, bringing cycling clubs to homes. Joining this “club” has entry costs anywhere from $1,900 to more than $2,300, with classes (streamed online) costing $2,400 to $3,000.

Sounds like a religion? One class is called “Sundays with Love,” offering various Christian messages (the Word while you workout). The Church, of course, is all about community and the power of communion, one Bread, one Body, connected to the Vine.

Feeling special? Like they belong to a cause or place bigger than themselves? Few recall Facebook started as an exclusive “club” before it became a community.

When Facebook first started in 2004, you had to be a student at Harvard University to join. Then, they expanded it to a few more universities. Finally, all universities. You needed an email address that ended in “Edu,’’ instead of “.com.” Not just anyone could join, adding to the sense of belonging.

Over time, Facebook added high school students and, finally, everyone. It was more exclusive.

Similarly, supporters of Donald Trump who found themselves locked out of their social media accounts are rushing to join or form new communities of their own. Mike Lindell, the My Pillow developer, is promising a new community while a Trump advisor says the former president may start his own platform over the next few months.

“It’s going to be built completely from scratch, from the ground up, and that’s going to give him the opportunity to control not only the distribution of it but also who participates in it,” Trump advisor Corey Lewandowski said in an interview.

Other corporate clubs focused on growing their own community

The first communities, dating back thousands of years, centered around the idea of protection and safety in numbers, a fortress where you go to be safe and welcome.

A quick review of your bills will show several corporations focused on growing their own communities by making you feel like a special part of their elite club:

Hilton Grand Vacation saw its stock price crash as low as $8 at the peak of the pandemic. One year later, HGV has since quintupled to as high as $44.17.

Last month, HGV agreed to buy Diamond Resorts International for $1.4 billion, creating a well-known global brand with 154 resorts and 720,000 property owners. They are growing their: “club” and sense of community.

HGV estimates the merger will build a new industry-leading brand that will give members a 140 percent jump in “drive to” resorts. Currently, HGV has three resorts in Myrtle Beach, all within walking distance of each other, plus properties down the South Carolina coast in Charleston and Hilton Head Island.

When completed this summer, the new merger adds new Myrtle Beach options, including Dunes Village Resort and Hotel Blue, both in Myrtle Beach and the Ellington at Wachesaw Plantation in nearby Murrells Inlet, plus Peppertree Ocean Club in North Myrtle Beach.

NBC's American Auto Shows Why Hollywood Doesn't Get Detroit, the Midwest or Most of Its Ever-Shrinking Audience

Aretha Franklin Wins New “Respect,” as Her Song Is Ranked the No. 1 Song of All Time by Rolling Stone

Aretha Franklin zooms to new fame: From a new Post Office, to her freeway to a top film and now, the №1 song of all time. Above: a 1968 publicity photo of Aretha FranklinBillboard magazine via Wikimedia Commons.

State of Michigan to Unemployed: Happy Labor Day — Now Get Back to Work

Notices arrived Saturday saying benefits are cut off immediately, the state announced over a holiday weekend devoted to labor, work. On Monday, Labor Day, recipients found they couldn't even collect payments for past-due benefits.Photo by Alevision. co on Unsplash.

Diocese of Lansing Releases Realignment Plan: What Will Catholic Churches Look Like After New Parish Pairings?

Michigan's Lansing Diocese is a global role model for evangelization, but it’s still shrinking in low-growth Rust Belt region. The Diocese of Lansing Realign Resources for Mission committee recently released its recommendations after two years of work.Image courtesy of the Diocese of Lansing.

If Your Car Lease is Expiring, It's Time to 'Use or Lose' Your Unused Miles

Road trips before the end of a lease? More than a third of new vehicles were leased in 2019 —it’s time to use up your miles?. Road trips are soaring as 2019 car leases expire.Image by Free-Photos from Pixabay.

Where it All Began: ‘The Summer of 19 You and Me’ reveals why we keep returning to Myrtle Beach. Grand Strand piers are magnets for visitors throughout the year.Image by Joe Chiaro from Pixabay.

Britney Spears gained fame singing in a Catholic school girl dress: Is she finally converting?. Britney Spears live in concert, 1999.Photo via Wikimedia Commons. God’s sense of humor? In the 1990s, we parents of Millennials got nervous as our pre-teen kids moved from adoring the purple Barney the Dinosaur to liking provocative Britney Spears.

The Return of Coleman Young? Son of Former Mayor Coming to the City-County Building Bearing His Name?

DETROIT — Coleman Young II, one of the top vote-getters in the citywide “at large” City Council primary election, is almost certainly heading toward the City-County Building named for his legendary father.

When your Church says one thing and the polls say another. Speaker Nancy Pelosi with Catholic Bishop Aloysius Jin Luxian after discussing religious freedom in China.Photo via Wikimedia Commons.

When someone dies of COVID, everyone asks, ‘Were they vaccinated?’ Why states should add that key detail to their death tallies. Michigan isn't yet reporting the first question asked after a COVID-19 death: Were they vaccinated?Image by Fernando Zhiminaicela from Pixabay.

ORCHARD LAKE, Mich. — From Ford factory floors to the young men who emulated him at St. Mary’s Prep to executives and clergy who needed his counsel, Tony Koterba always inspired others.

Candice Miller on Flooding: ‘We All Knew It Was Coming’ - What About the Next Storm?

Walking in Memphis at 30

The little known origin of a song that captures the spirit of Memphis. Walking in Memphis just marked its 30th anniversary.Image by StockSnap from Pixabay. “Walking in Memphis.” by Marc Cohn turns 30 this year. It’s always jumped out because it’s so different from the musical world it enters into.

When the Rains Stop, Michiganders Can Finally Get Back to the Beach

Ready for Summer Fun? Michigan Parks Saw 30% Gains During Pandemic, $400 Million in Upgrades on the Way. Lake Michigan has stunning beaches but others are closer to metro Detroit.Image by David Mark from Pixabay.

DETROIT — St. John Ascension Detroit Hospital Tuesday reported a first for the pandemic: zero COVID-19 patients, a first since the outbreak began. The east side Detroit hospital where Blessed Solanus Casey died in 1957 has been a bellwether of activity throughout the pandemic, hitting its all-time peak April 6, 2020, when 295 of the 444 beds were dedicated to COVID-19 cases.

The Roman Catholic Polish Seminary, founded in Detroit in 1885, is slated to close in spring 2022. A 2019 Polish Mass at Orchard Lake's St. John Paul the Great Shrine Chapel.Photo by Joseph Serwach.