First Among the Fall Festivals, Celebrate Sukkot This Week - The Feast of the Tabernacles 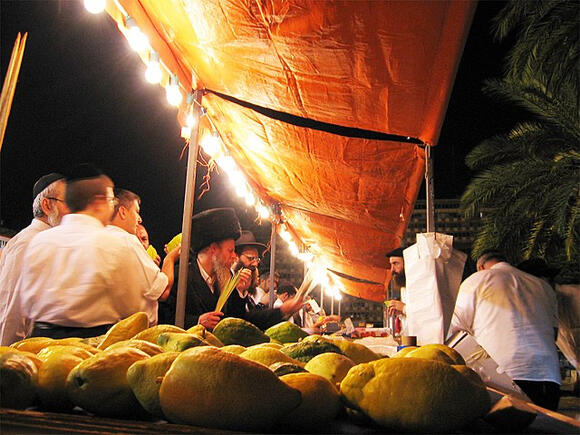 Sukkot is a weeklong Jewish holiday celebrated five days after Yom Kippur. This year, the holiday is celebrated October 9-16, 2022. Sukkot celebrates harvest time and commemorates the divine protection of the Israelites as they fled Egypt. Sukkot is celebrated by living in a foliage-covered booth -known as a sukkah, and eating the "Four Kinds" - four specific types of vegetation.

Sukkot is the only holiday that doesn't appear to commemorate a historic event. The Torah (the first five books of the Hebrew Bible - Old Testament in Christian Bibles) refers to it by two names: Chag HaAsif (“the Festival of Ingathering,” or “Harvest Festival”) and Chag HaSukkot (“Festival of Booths”), each expresses the reason for the holiday.

In Israel, crops grown in the winter are ready for harvest in late spring. Some crops remain in the fields to dry before harvest in early fall. Chag HaAsif is a time to express appreciation for a bountiful harvest.

The name Chag HaSukkot commemorates the temporary dwellings the Lord made to shelter their ancestors as they left Egypt. Some interpret the shelters to be miraculous clouds of glory which shielded them from the sun. Others believe it is a reference to the tents where they dwelled during their forty years in the Sinai Desert.

The first two days -beginning at sundown on October 9 until nightfall on October 11 in 2022- (one day in Israel) are yom tov, when work is forbidden, candles are lit in the evening, and festive meals are preceded by Kiddush (a ritual where words are spoken and wine you take a drink of wine) and a bite of challah (white leavened bread - typically braided) dipped in honey.

The intermediate days (the evening of October 12 until sunset on October 16 in 2022) are known as Chol Hamoed. These aren't formal holiday periods, so there aren't the usual restrictions, such as no work or use of electricity as seen in some holidays. During these days, Jews observing Sukkot dwell in the sukkah and take the Four Kinds every day of Sukkot (except for the Sabbath day, when they do not eat the Four Kinds of food.

The final two days begin at sundown on October 16 and end at sunset on October 18 in 2022. These are technically separate holidays (one day in Israel): Shemini Atzeret / Simchat Torah.

Living in the sukkah

A week is spent eating all meals in the sukkah, treating it as a temporary home. The sukkah is a shelter of at least three walls and a roof of unprocessed natural vegetation - like bamboo, pine boughs, or palm branches and fronds. The sukkah is to be located under the open sky (not inside another structure.

The purpose is to spend as much time as you can within the sukkah - eating your meals here at the very least. This is especially true for the festive meals of the first two nights where at least an olive-size piece of bread or grain-based food is taken in the sukkah. The Chabad practice is to not eat anything outside of the sukkah.

A main Sukkot observance is the taking of the "Four Kinds":

These are taken each day of the festival except for the Sabbath. Taking the Four Kinds, reciting a blessing over them and bringing them together, and waving them in all six directions (left, right, forward, back, up, and down). The Four Kinds represent the various personalities comprising the community of Israel, emphasizing their unity on Sukkot.

For more information on Jewish beliefs, practices, foods, and holidays, check out My Jewish Learning, Chabad.org, Jewish Virtual Library, or many of the other sites readily available on the internet.

The local synagogue - B'nai Shalom Congregation in Blountville, Tennessee is also a wealth of information. Check out their website or give them a call. Teaching and learning are part of the Jewish tradition.

The old saying goes, "If you don't like the weather, just wait a few days..." The people of the Tri-Cites have waited long enough for the frigid temperatures to leave us from Christmas weekend. The weekend caused numerous power and water outages around the area as pipes froze and ground heave led to the main water distribution lines failing. The warming weather helped most water utility districts finally put the lines back together. This time strong winds and storms are marching across the area, leaving thousands of customers without power in the Tri-Cities and many areas in Southwest Virginia.

Are You Ready for Tennessee Laws Taking Effect in January of 2023?

Local Special Forces Veteran and martial arts instructor David Collins will host a ballroom dance class on Saturday, January 14, in Blountville, at Fire & Water Martial Arts. Next month's fundraiser will offset the increased cost of propane and other utilities used by the Christian-based martial arts school.

Should South Fork merge with Bristol or the Bristol-Bluff City Utility District?. The utility serving the areas east of Bristol, Tennessee, did not receive a favorable report during an April 2022 investigation by the Tennessee Comptroller's Office. The technical secretary to the state's Utility Management Review Board says it's not feasible for the utility to continue as it is now.

Jonesborough officials are beginning to gain ground on the multiple water system failures. Officials reported the main water tank is now holding steady at 31 feet as of noon Thursday, December 29. Crews restored service to Embreville, Bumpus Cove, and Highway 107 - bringing approximately 1,000 customers back online. Officials continued monitoring the tank until 3 p.m. today before moving on to the Conklin Road area.

Legendary guitarist and Rock and Roll Hall of Fame inductee Ace Frehley is coming to the Paramount Theater in Bristol, Tennessee. Frehley will be at the Paramount on February 2, where he'll perform in front of a live audience.