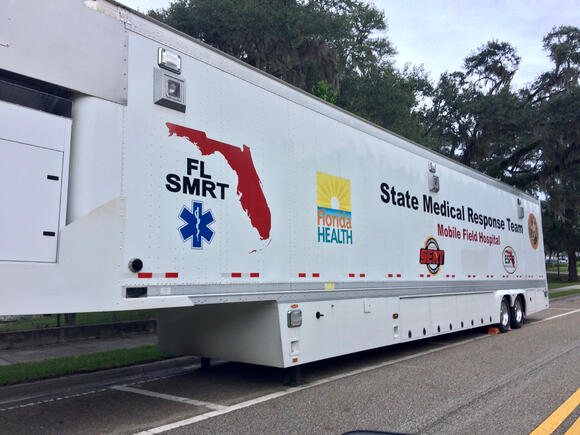 With an imminent strike from the latest hurricane threatening Florida's Gulf Coast and Keys, Emergency Management Assistance Compacts (EMAC) contracts are flying between state emergency operations centers (EOCs) in FEMA Region IV. With Florida under a state of emergency as declared by Governor DeSantis, the Tennessee Army and Air National Guard are mobilizing personnel to assist. Tennessee EMS operations are also en route to the "Sunshine State" with ambulance strike teams to help move patients from medical facilities in the danger zones.

Tennessee has developed a fellowship with Florida in recent years due to emergency management operations during times of crisis. The "Volunteer State" has sent personnel and equipment to almost all calls for assistance in recent years. As recently as Hurricane Irma, the Category 5 storm that was expected to ravage the entire state in 2017, Tennessee responded with multiple support teams for emergency operations, medical transport, and health care.

Recent times have left Tennessee with a shortage of qualified professionals to staff normal operating levels in hospitals, ambulance services, police, and sheriff's departments - not to mention the private sector. This shortage has yet to translate into any willingness for professionals to volunteer to help in disasters. The shortcomings arise due to a lack of personnel to run operations at home and support disaster response in some jurisdictions.

The regional American Red Cross office is also mobilizing to respond to the disaster zone. The Red Cross typically feeds the masses and helps groups make it through the initial recovery stages in disaster. The emergency responders are normally able to make their way back home within a week or two of disasters while the Red Cross may be on the ground for a month or longer.

Christmas celebrations in Jonesborough continue on Saturday, December 3 with Doggone Christmas. The event runs from 11 a.m. to 3 p.m. You can bring your canine family to get their picture with Santa, enjoy a treat station, and you can shop at the Christmas Market for pet-friendly items and Christmas gifts for everyone on your nice list. Downtown merchants hope you'll explore downtown Jonesborough and support the local businesses.

Holiday shoppingPhoto byFreestocks/UnsplashonUnsplash. Downtown Johnson City's annual Sip Shop and Stroll event is back for the holidays as a way to buy local Christmas gifts and enjoy downtown restaurants. You'll need to buy a ticket to receive your official coffee mug with a cork bottom to receive your adult or family-friendly beverage from participating vendors.

2021 Jingle and Mingle in KingsportPhoto byKingsport Downtown Association/Facebook. Christmas officially kicks off in the "Model City" this weekend with a day of shopping, holiday decorations, the Christmas parade, and the tree lighting at Church Circle.

Ice skatingPhoto byKelli McClintock/UnsplashonUnsplash. Skaters finally took to the synthetic ice at Skate by the Doe at Elizabethton's Covered Bridge Par Saturday. The park opened amid unseasonably warm temperatures. The synthetic material used in the ice rink doesn't require the ambient temperature to be below freezing to enjoy ice skating at the seasonal attraction.

Happy lifePhoto byGabriela Monalisa/UnsplashonUnsplash. Many of us have heard, “Happy wife, happy life.” But is this more than just a saying? Years of watching my parents and grandparents have led me to believe it's true. Sullivan County is a great place to get married and raise a family. I met my wife in neighboring Washington County, and we spent lots of quality time supporting each other.