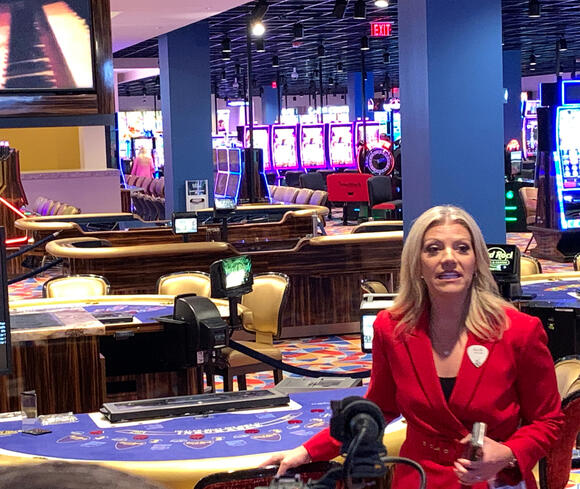 Bristol Casino President Allie Evangelista says the public response to the temporary Bristol Casino has been very positive (90%). Customers like the temporary casino layout with its restaurants, bar, and sportsbook offerings. Evangelista emphasized Hard Rock is focused on entertainment, and thus they continually work to address complaints and concerns.

Customers especially comment on how friendly and positive the team members have been in their new roles. The community knows the staff is still learning, but they remain positive and complimentary of the staff.

Evangelista says the most common complaints in the early phase of the casino's opening dealt with the amount of smoke on the main gaming floor. In a story with the Bristol Herald Courier, Evangelista said “That was the biggest pushback. First, we are a smoking facility, and we have that all over the country. There are casinos that are fully non-smoking and fully smoking. Here the gaming floor is smoking with a non-smoking gaming area. Then everything outside the casino floor is non-smoking.”

Evangelista said they made a major change to lessen the smoking impact for those who don't want to be around it. There is another entrance from the restaurant entrance beside the Hard Rock Sportsbook counter, that leads directly into the non-smoking gaming floor.

Evangelista says they have now installed and completely swapped out the rental units as of August 8, with the new units using 100% outdoor air. The new units are called 'Smoke Eaters' - a filtration system placed in casinos to eat the smoke and provide much cleaner air.

Casino patron Nicole Paige of Johnson City said, "The air on the gaming floor is much better than it was when I came here with my husband last month." Others who frequent the facility say smoke is much lighter during the weekday, but it does get bad on Friday and Saturday evenings when the floor is packed. The restaurants and non-gaming areas are usually fine all the time, Paige said.

Evangelista says construction on the Hard Rock Hotel is on track to start, but a lot of the work going on is unseen. Much of the work taking place has been the demolition of the interior of the Bristol Mall building. The new area will be in the old Sears store, and much work was done to make it look like a casino instead of a mall inside.

Evangelista says, "We’re finding some challenges securing hotel rooms on the weekends because hotel occupancies are growing for the main places we tend to host our guests.” The rooms are filling up fast for the typical dates in September for the Rhythm and Roots Reunion, and the NASCAR races at Bristol Motor Speedway. Evangelista says they are working with the hotels in the area to try and secure rooms for their guests, but running out of rooms can be a good thing for the community.

The first hotel tower construction should commence soon, but a date has yet to be announced. Evangelista says the plan is still for everything- the hotel, the Hard Rock Casino, the restaurants, bars, and the entertainment venue all open at one time.

“We’re finalizing some of the plans but everything is on track and we’re still aiming for May 2024,” Evangelista said.

Those who need to express their desire for fitness and getting out before indulging in a Thanksgiving feast are already preparing. If you aren't a member of the "fit club," don't worry about getting outside of your comfort zone - you can still participate on Thanksgiving, Thursday, November 24, in the 17th Annual Turkey Trot 5K in Johnson City!

The Northeast Tennessee, Emergency Preparedness Coalition, sponsored the 2022 Mental Health Conference "Help for the Helpers" on November 2 at the Carnegie Hotel in Johnson City. The conference is geared to provide information to the local health and emergency response community on the multiple resources available to help local responders and healthcare providers and how they can help their peers and support them in dealing with the many stressors of the job.