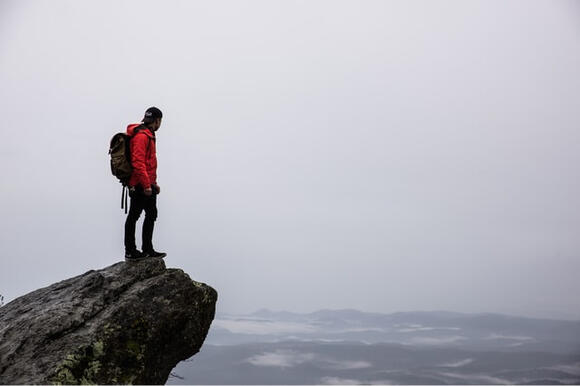 The town is the namesake of North Carolina's oldest tourist attraction - The Blowing Rock. The Blowing Rock is a large cliff 4,000 feet above sea level. It overlooks the Johns River Gorge 3,000 feet below. The shape of the cliff creates a phenomenon causing the walls of the gorge to form a flume where the northwest wind has enough force to return light objects over it.

The Blowing Rock attraction has an entry fee of up to $9 per person (less for children, etc.), where patrons enter through a gift shop and travel outside into a well-kept garden area with flowers, plants, turtles, paved walkways, overlooks, an ice-cream parlor, and snack bar. The panoramic views are beautiful and worth the cost of admission. The walkways are paved with brick.

The town is very welcoming and walkable. The streets, parks, and sidewalks are clean and inviting. There are several eateries, shops, and galleries to enjoy as well. Be aware there aren't many public restrooms available - even in the library or some restaurants.

By chance, we wandered into Woodlands Barbecue on the U.S. 321 Bypass in Blowing Rock. The unassuming restaurant was simple on the exterior, and well decorated on the interior with plenty of lighting. The amount of light assured patrons of the cleanliness of the establishment, and the number of diners was a good indication of the quality.

The prices were very reasonable the staff was very friendly and accommodating. Our party had smoked turkey salad, club sandwiches, fries, barbecue sandwiches, chicken, and slaw. This was after enjoying an appetizer of fried pickles.

The food was good and the service was even better. Two of our group were visiting from New York and compared the quality of the fried pickles to a few others ordered elsewhere during their trip. These were definitely the best.

About the Blowing Rock

The Blowing Rock developed during the period when geologic forces were thrusting the Appalachians upward. Other processes of weathering and erosion began tearing down the mountains. 250 million years of weathering and erosion stripped away the uppermost miles of rock that originally capped the mountains, leaving the once-hidden rock exposed atop the Blue Ridge Mountains and other areas of the Appalachians.

The old rocks were changed by high pressures and temperatures during the time they were buried. Geologists classify these metamorphic rocs as GNEISS ("nice"). The U.S. Geological Survey (USGS) says the age of gneiss was about 1,055 million years ago. Age was determined by measuring the amount of radiation present in the small zircon crystals found within the rock. This particular rock is officially designated by the USGS as The Blowing Rock Gneiss.

Those who need to express their desire for fitness and getting out before indulging in a Thanksgiving feast are already preparing. If you aren't a member of the "fit club," don't worry about getting outside of your comfort zone - you can still participate on Thanksgiving, Thursday, November 24, in the 17th Annual Turkey Trot 5K in Johnson City!

The Northeast Tennessee, Emergency Preparedness Coalition, sponsored the 2022 Mental Health Conference "Help for the Helpers" on November 2 at the Carnegie Hotel in Johnson City. The conference is geared to provide information to the local health and emergency response community on the multiple resources available to help local responders and healthcare providers and how they can help their peers and support them in dealing with the many stressors of the job.