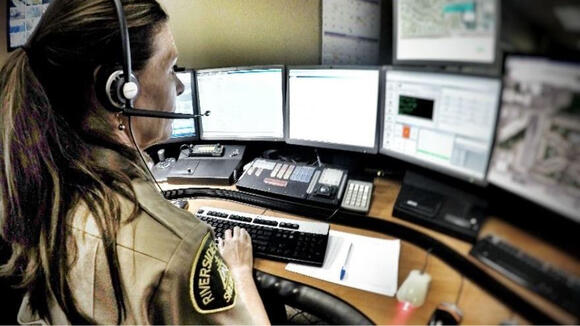 Mark Ridings, the Carter County Communications Officer, addressed the county commission. Ridings reported on findings from his research to determine the best radio system for the county. Commissioners voted to approve Ridings' recommendation for TACN.

Ridings says the cost will include erecting three additional radio sites to cover the mountainous terrain within Carter County. These would include building a site on White Rock Mountain in the county, Fall Creek (Avery County, North Carolina), and a site on Stone Mountain in Johnson County. Scott Tidwell of Motorola Solutions said the system should provide 98% mobile coverage. This means vehicle-mounted radios should be able to communicate in 98% of the county. Hand-held portable radios would be less effective in remote areas of the county.

When explaining the savings, Ridings said Motorola has agreed to provide a simulcast for the communications network, which would require only two frequencies for the entire system. Ridings says 35 frequencies would be required without simulcast. A simulcast system would allow the frequencies to be the same across the county, without having to switch from channel to channel to reach other sites within the county. The limited number of channels share space similar to a telephone network in a building, where hundreds of telephones actually only use a few actual phone lines because they aren't in use at the same time in most instances.

Travis Hill (6th District) made the motion to choose the Motorola proposal. The motion was to use funds from the Federal American Rescue Plan. Bradley Johnson (3rd District) objected. Johnson said, "It was like buying a pig in a poke.” Isaiah Grindstaff (4th District) said his concerns were whether the signal could reach the Carter County Detention Center and Sheriff’s Department offices in the old jail. Grindstaff also expressed concerns about the system working within some of the schools.

Commissioner Robert Acuff (1st District) said another $800,000 would need to be taken away from other groups funded through the American Rescue Plan funds, as they had already been included in the Health and Welfare Committee's priority list.

The motion to adopt TACN was approved with a vote of 17-3. Commissioners voting against were:

The Tennessee Advanced Communications Network (TACN) is a multi-state public trunked radio system located in Tennessee and Georgia. TACN is a statewide project that combined the TVRCS (Tennessee Valley Radio Communications System) and a statewide system into an emergency communication system for the entire State of Tennessee.

The system uses a combination of VHF High Band, 700 MHz, and 800 MHz to cover the different terrains within the state. Using the TVRCS as the primary phase one regional backbone, allowed for interoperability with multiple county and municipal governments - including agencies within Georgia. As the system expands with other regional systems, it incorporates other municipal and county trunked systems to increase the user buildout and coverage of the system as a whole.

In Tennessee, many municipal and county agencies have gone onto TACN, as a buildout of their own system with dedicated frequencies for their own use and common channels for mutual aid. Locally, Greene County, Sullivan County, Washington County, Bristol, Johnson City, and Kingsport are already on TACN.