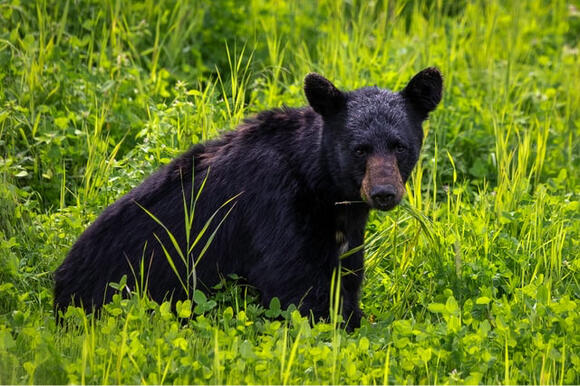 Matt Cameron at TWRA says they don't have the numbers to back up the assumption, but there appear to be more bear encounters this year than ever before. Cameron says it could be a case of more documentation with everyone having their camera-phones handy compared to years past. The agency says bears are getting into cars, cabins, and homes more often than ever before.

The TWRA says "Put simply, the odds of bear-human interactions are high in and around the mountainous areas of East Tennessee." More bear interactions occur in towns bordering the Great Smoky Mountains National Park, as it has a higher concentration of black bears. The park and other high-traffic areas have seen more interaction with the state's 5,500 black bears.

Several incidents have been reported this year in Eastern Tennessee. A bear had to be captured and euthanized after tearing into a tent in the Smokies, breaking into a house in Sevier County, and from a campground on Watauga Lake, another bear trapped itself in a car and died of heat stroke in Sevierville.

Sergeant David Sexton of the TWRA says people have an "overwhelming desire" to have a close encounter with a black bear. Sexton says people intentionally feed bears without regard for the consequences to the bears or people.

Black Bear Program Coordinator, Dan Gibbs, says a bear's sense of smell is seven times better than a bloodhound's. Gibbs says people should lock their doors, roll up their windows, and never leave anything in their cars with the faintest odor of food - such as wrappers, bags, or even air fresheners."

The problem with bear-people encounters is that bears are wild animals and if they begin to associate people with food it makes them less fearful of people and they seek out people and food more often. This can be deadly for the bear or people as bears are powerful and have large claws and teeth to pull apart dead trees and dig for food. They are omnivores and can and will eat most anything. Once a bear has shown a lack of fear and breaks into a home, car, or tent where people are - it could harm or kill a person and must be caught and euthanized.

Common hiking and camping knowledge, as taught by the Boy Scouts of America, includes having a "bear bag" to store your food several feet off the ground and several feet from the trunk of a tree, and well away from your campsite.

Learn how to live with bears

People living near the mountains and rural areas of Tennessee should familiarize themselves with how to care for their property and home to minimize unwanted interaction with black bears. They should also know how to act, should they encounter a bear. The people of East Tennessee should be Bear Wise. See information and learn how to be prepared at bearwise.org.

The comeback of the bear

The 1970s marked the start of Tennessee’s modern era. Bear hunting season closed from 1970 to 1972 so the bear population could recover.  When the season returned in 1973, only 16 bears were harvested; 14 were killed in the Tellico Wildlife Management Area. A report from the 1974 Eastern Workshop on Black Bear Management reported black bears remained in only 10 counties.

The early work of the Tri-State Black Bear Study Group (consisting of Tennessee, George, and North Carolina) defined two primary issues to solve. These became a priority for the TWRA over the next four decades.

The first was to reduce illegal kills. TWRA Wildlife officers spent, and still spend, countless hours working bear enforcement. The largest undercover bear hunting sting in North America took place in the 1980s. Called Operation Smokey, it resulted in the arrest of 43 individuals in Tennessee, Georgia, and North Carolina, with a combined 130 state and federal violations involving the poaching and selling of bear parts. These efforts have continued and resulted in a steady decline in poaching.

The second issue was to protect the females in the bear population. Because females hibernate earlier than males, the hunting season was moved later in the year. This strategy reduced the females harvested from 56% before 1981 to 37% over the next 23 years.

As populations have responded positively, the agency provided opportunities for earlier hunting seasons with females making up 40% of the harvest over the last eight years. Further protection of females was accomplished by the establishment of bear sanctuaries, which provided source populations of breeding females in areas with quality bear habitats, suitable for raising young.