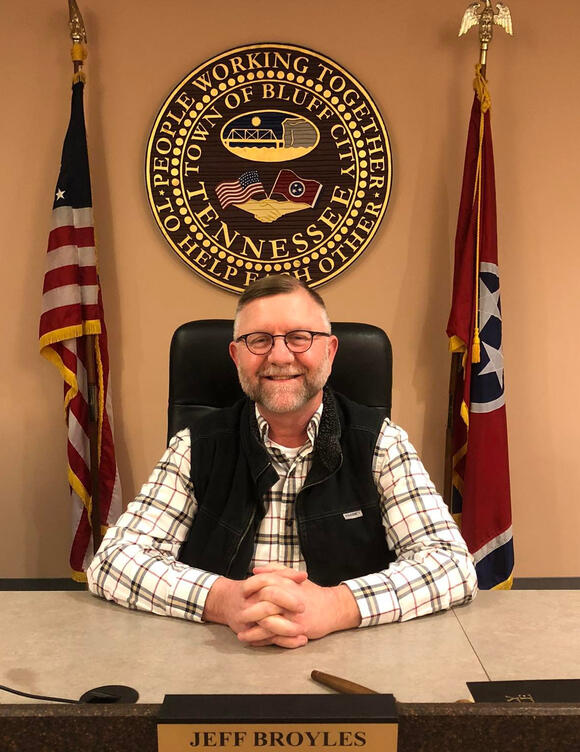 Jeff Broyles assumed the role Monday morning, August 1. He is as acting mayor of Bluff City and will serve as city manager until a new mayor is elected to office in the upcoming elections this November. Broyles was elected to office as a City Alderman in 2020, and his current position on the board. Broyles has been in the position of Vice-Mayor since 2022. He says the Board of Mayor and Aldermen will meet tomorrow night, August 2, in the regular meeting, where they will formally accept Bowling's resignation.

Boyles returned to Bluff City after retiring from thirty years of service in the United States Army, where he rose to the rank of Command Sergeant Major. He joined the service after graduating from Sullivan East High School. These days Broyles works as the CSS Site Manager for Salem Tools in Rogersville, Tennessee.

His devotion to the community and civic duty has been a recurring theme in his life. Broyles began serving the people in the Bluff City Rescue Squad as a junior squad member in the 1980s, along with his parents. Since returning home, he has rejoined ties with the rescue squad, been active in city and county politics, and has been involved with the Impact Community Center in Bluff City, at the home of the former Bluff City Middle School.

"It's not about the money. The Mayor is only paid $75 per month to serve as Mayor and City Manager, and that's before taxes. The Aldermen are paid $10 per month. I cleared $9.23 from the city as an Alderman/Vice-Mayor after taxes." - Jeff Broyles, Mayor of Bluff City, Tennessee

Broyles says his seat on the Board of Mayor and Aldermen is not up this year, as his seat isn't up for re-election until 2024. The seats held by Ben Adams and Sandra Madison are up for re-election during this election cycle, as is the Mayor's office. Broyles intends to pick up a petition to run for Mayor in the coming days to retain the mayoral post.

The local primaries will be held this week, August 4, with the general election being held in November.