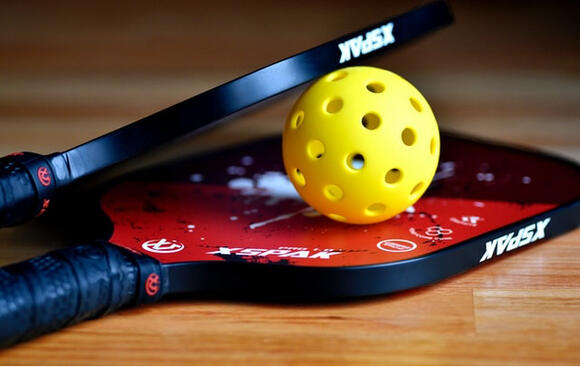 The sport is fun for all ages and abilities and has overtaken shuffleboard as a sport in many retirement communities.

Why the gaining popularity

The sport's number one player group is (74.5%) is the 55 and older crowd. Pickeball is a low-impact sport. This makes it perfect for adults who need to watch the wear and tear on their joints.

Golf and tennis are also good cardiovascular exercise for the 55+ up demographic, yet pickleball is a better option for those with joint problems and pre-existing injuries. The smaller court and lightweight ball gives players a workout within the confines of a much smaller court - reducing their risk of inury.

T'he sport is good for active adults and is becoming a key amenity for those settling down in new communities. It's becoming a hot commodity in adult centers. a large center of 27 courts was built at the PGA Village Verano in Port St. Lucie, Florida.

Kolter Homes’ active adult communities has also taken the plunge with Cresswind at Lake Lanier in Georgia remodeling from a few tennis and badminton courts. The arrival of new residents from Florida in 2013 brought about the Cresswind Pickleball Club, which now has over 200 members, organized tournaments and 15 dedicated courts for play.

With large-scale facilities popping up across the country, pickleball is America’s fastest growing sport, especially in active adult communities.

According to a 2021 article in the Palm Beach Post, the sport was envisioned by, Bill Bell, Barney McCallum and their Congressman friend, Joel Pritchard during a family vacation where they tried to get their gets playing in the gloomy cloudy days in 1965. They began with a badminton net, carved wooden paddles, and a plastic ball - similar to a Wiffle ball. They tweaked their design over time.

The name, "Pickleball" was a reference to lesser athletically inclined people in Crew, being relegated to the "Pickle Boat", as you don't need much athletic ability to play the sport. Initial stories appeared about the sport being named after a dog named Pickles who loved to chase errant balls, but an investigation by Pickleball Magazine debunked the story, as it was invented before the dog was born.

There are at least 14 towns & cities in Tennessee where you can play Pickleball on a ready-made court. In Johnson City, you can find Pickleball at the Memorial Park Community Center at 510 Bert Street. Bristol Residents can find a court at the Bristol Sportsplex at 109 Raytheon Road, and Kingsport residents will find courts at Lynn View Community Center at 257 Walker Street and at Riverview Park near the corner of Wheatley Street and MLK Jr. Drive near the Splash Pad.