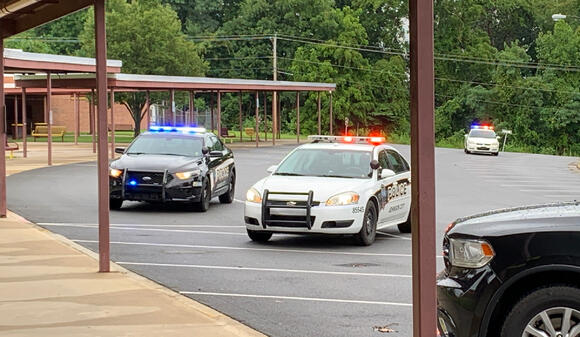 Emergency responders were dispatched at 9:02 a.m. on Thursday after an emergency alert, and a radio call from school department employees went to the 9-1-1 dispatch center. The no-notice exercise involved police, fire, EMS, rescue, school employees, local hospitals, and the regional medical communications center. Responders were notified at the time of dispatch that this was an "exercise" - for safety reasons.

Police were the first responders to arrive and assess the situation, while fire, EMS, and rescue units were initially staged just off-site to learn when they could safely approach the school. Student volunteers assumed the role of victims and bystanders during the event, while the S.W.A.T. commander checked the firearms of responding officers for an additional safety precaution.

The event was a full-scales exercise where all levels of responders played in their typical response roles, without direction by managers - to assess the knowledge and efforts that would come to play.

The formal after-action review is scheduled at the county emergency operations center next month. EMA, Fire, EMS, and rescue officials conducted an informal "hot-wash" at the EMS headquarters immediately after the exercise.

With the number of school shootings up in the United States in recent years, as well as the number of active-shooter events, the exercise will provide the schools and emergency response community in Johnson City with valuable feedback on how their response could be tweaked to maximize its effectiveness.