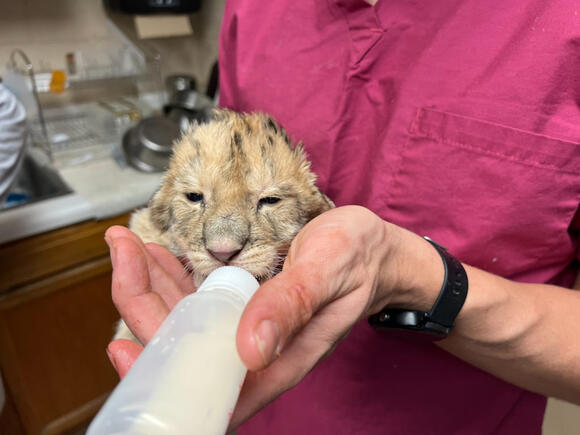 Officials at Zoo Knoxville announced the birth of a third cub to Upepo and Amara, endangered African lions. The lion cub was actually born on June 16, 2022.

Zoo Knoxville reports Amara is nursing and caring for the healthy cub. The cub's mother was helped by the University of Tennessee College of Veterinary Medicine, which provided emergency surgery after the cub's birth. Amara had a stillborn cub in her birth canal and was diagnosed with acute renal insufficiency.

The zoo reports Amara is undergoing treatment, with medication, and is showing improvement. She reportedly is bright and acting more herself these days.

The lion cubs are important to the zoo population of lions, in the care of zoos accredited by the Association of Zoos and Aquariums (AZA), which collaborates in the African Lion SAFE (Saving Animals From Extinction) program. Upepo and Amara's offspring are important to the continued survival of the species in captivity.

Upepo and Amara had their first cubs together on December 21, 2021, in Zoo Knoxville. While the pair had four cubs during the pregnancy, only two (Maji and Anga) survived and had to be delivered by emergency c-section due to one cub lodging in the birth canal.

The zoo (Zoo Knoxville) was previously known as the Knoxville Zoological Gardens or the Knoxville Zoo. The 53-acre park is located east of downtown Knoxville. It can be found from Interstate 40, by taking exit 392.

With over 1,200 animals on display, the zoo receives more than 585,000 visitors each year. Many programs are available to schools and groups by contacting the zoo office. Find more information on the facility, ticket prices, and the animals at their website zooknoxville.org.