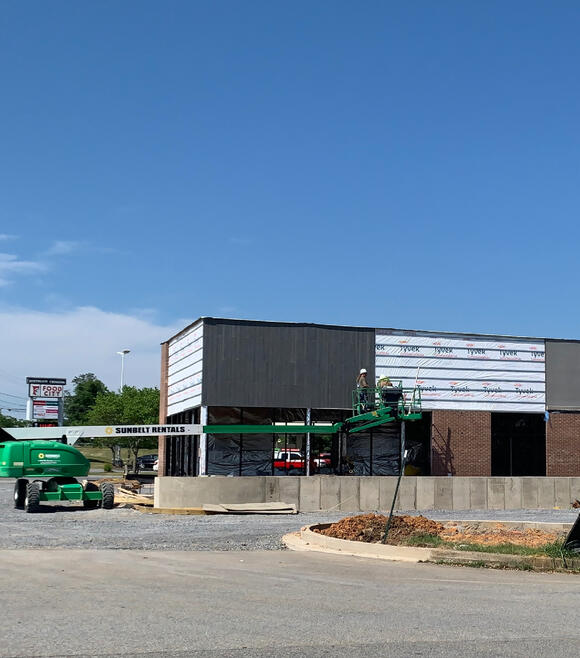 The upper part of Bristol, Tennessee's Volunteer Parkway continues to see new development at the Starbucks location at the Food City shopping center shows rapid progress. Many small businesses have popped up over the past few months - most notably restaurants.

The first noted newcomer was the Waffle House at 1005 Volunteer Parkway, near Auto Zone and 6th Street Extension. Waffle House was the first 24-hour restaurant to open on the Volunteer Parkway since Miller's Steak and Egg occupied the current home of Casa Mexicana at 1020 Volunteer Parkway in the 1980s. The 24-hour chain restaurant is one of the most dependable places to dine in times of disaster. Waffle House has a history of being the last to close and the first to reopen after hurricanes and other natural disasters - even if they must open with a limited menu.

Other restaurants preparing to open include Petro's Chili and Chips, between Pal's and Wash-N-Roll Car Wash. The location is also across from Auto Zone and may add to the congestion in the already busy area during Pal's lunchtime drive-through crowd. Petro's appears to have a limited dining room space, with most traffic coming through their drive-thru service. Petro's is expected to open in early July 2022.

The Asia Cafe Xpress under construction between Pal's and Petro's looks to be tailing the other dining establishments nearing completion in the area - yet it is scheduled to open in mid-July 2022. The Maryville, Tennessee-based restaurant will offer “Amerasian cuisine,” specializing in hibachi and Chinese-style foods. The Bristol location will offer a dine-in and drive-thru service.

Ray Morgan, vice president of operations at Asia Cafe Xpress, told the Bristol Herald Courier they are seeking to gain exposure in the Tri-Cities area by opening the Bristol location.

“We want to have a presence and a footprint that expands out of Knoxville, (and) bring something new, different, and exciting to the area, and be able to deliver it through a quick-service concept." - Ray Morgan, Vice President of Operations, Asia Cafe Xpress

Bristol is set to be the second restaurant of Asia Cafe Xpress. The first one opened last year in Maryville, Tennessee, according to Malaysian-born businessman Phillip Lim, Asia Cafe Xpress Chairman, and CEO.

The new Starbucks coffee shop being built near Walgreen's at the Food City shopping center is expected to be a draw to the grocer in the plaza. Food City has partnered with Starbucks in other Tri-Cities locations, operating in-store kiosks with Food City personnel. Some residents in the area, including CJ Smith and Virginia Davis of Bristol, believe it is an effort to draw more high-end buyers away from Walmart.

Other locations in Bristol and the Tri-Cities area see sustained business, whether in-store or in stand-alone locations.

One can't help but wonder if the rush of fast-food and coffee houses opening along the Bristol, Tennessee corridor toward Virginia is a means of posturing and laying the groundwork to build a dedicated route from the Tri-Cities that will bring Tennessee and North Carolina casino patrons by the Bristol Motor Speedway and up the Volunteer Parkway to reach Virginia's first casino in Bristol's twin city.

The cities continue to plan for infrastructure changes, yet many residents I've spoken with do not believe either city will be fully prepared for the change and influx the area will see when the Bristol's Hard Rock Hotel and Casino Resort opens in a couple more years with a large hotel and conference center capacity.

In the meantime, residents are looking forward to more dining options.