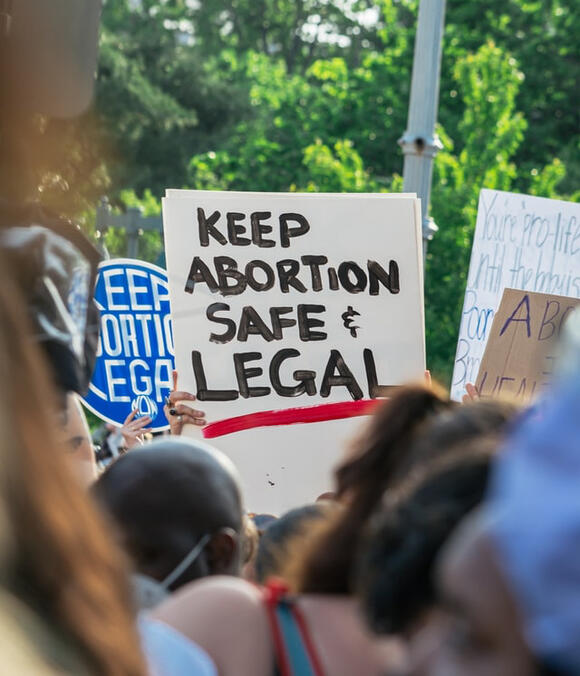 Amid the festival at the downtown pavilion Saturday, there were several attendees who organized and marched along the outskirts of the festival and around Founders Park in Johnson City, in protest of the decision by the Supreme Court to overturn Roe vs. Wade.

The Price Community and Education Center of Johnson City sponsored the day-long event as a place where the people who belong and support them could gather in celebration of Pride Month, with dancing, musical acts, vendors, food trucks, and a gathering of like-minded individuals. The location was established as a festival where they could gather together in peace and safety without judgment of attendees.

At least one of the marchers is also working to organize another march on July 2, in Johnson City.

What does the overturn of Roe v Wade mean?

Many of those in attendance supported the march to protest the Supreme Court's decision. They believe overturning the landmark case strips away the right for women to have an abortion and its protection under federal law.

Reading the many positions citing Justice Ginsburg, arguments on both sides cite her opinions from differing angles. The one common theme appears to be the equation and prime targets of the argument.

Ginsburg cited the original ruling in Roe v. Wade as focusing on the doctor's right to practice. The court appeared to have acted without full consideration of all angles and cited what she calls "bad law" to support their position. Ginsburg believed the court acted in a way that went too far and cut out the legislators and their ability to pass supportive legislation.

The same could be said today. Each state has the right to pass the legislation desired in support of its people who elect them. Should the majority of states believe it should become a federal right, the constitution should be amended to protect the right.

The Guttmacher Institute says 22 states have laws that could be used to restrict the legal status of abortion. These include seven states that never changed their laws to ban abortion after Roe v. Wade was initially decided in 1973. Thirteen states passed legislation banning nearly all abortions in what is known as a "trigger law," going into effect after Roe was overturned. Another nine states have restrictions that were initially deemed unconstitutional until Roe was overturned. Lastly, four states passed constitutional amendments to their own state constitution, explicitly declaring that their constitution does not secure or protect the right to abortion or allow the use of public funds for abortion.

Washington D.C. and sixteen states have passed legislation protecting the right to an abortion. Four of these (and D.C.) have stipulated the right to abortion remains throughout the pregnancy without "state" interference. The other twelve explicitly permit abortion prior to the viability of the fetus, or when needed to protect the life or health of the mother.