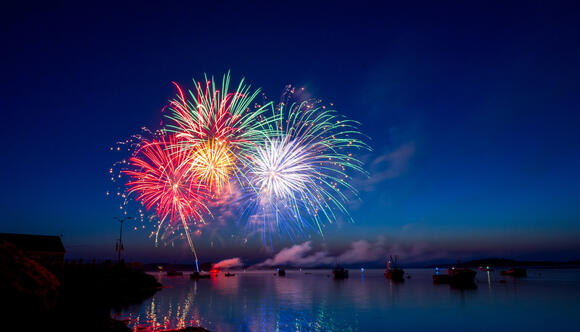 The TVA property known as Observation Knob Park was leased to Sullivan County, Tennessee, to develop and operate for public recreational use in 1975. The leased term ends in 2025.

The 227-acre+ park appears full to many passersby. Vance says the park is underutilized. The park has 175 designated campsites with water and electrical access, with some designated as "seasonal" sites - meaning a person can park their camper or RV there for the whole season. The other sites are designated for day/weekly use, like the campsites at state parks and KOA-type campgrounds.

The park management has installed access gates into the main campground, requiring campers and guests to check-in at the park office to obtain access. There is also a booth for self-service in the daytime parking area and boat launch facility, where the other bathhouse, picnic shelter, and stage are located. There is a $3 daily fee for access to enter the park (per vehicle). The daily use fees are not used at Tennessee State Parks, but the National Forest Service has begun using daily use fees for its campgrounds.

Many people entering the park are unaware they are traveling along the top of a saddle dam, connecting state route 44 and Observation Knob. The saddle dam is a safety measure that was installed just after the completion of the South Holston Dam, to prevent flooding in the valley, should lake waters exceed safe levels intended for the dam and spillways.

The Sullivan County Department of Tourism is working with Park Officials to obtain a $500 thousand grant for the development of a walking trail. Chris Irke, the current Park Manager, says he has made quite a few improvements since he has taken his post. Vance says the park is now in a more financially stable position than it was in 2020 when the Kingsport Times-News updated a 2010 story about the facility's finances.

Observation Knob Park is home to spectacular views of the area and is a non-alcoholic family campground on South Holston Lake in historic Sullivan County. The facility receives mixed reviews from RV and camping sites. The park is located at 553 Knob Park Road, Bristol,