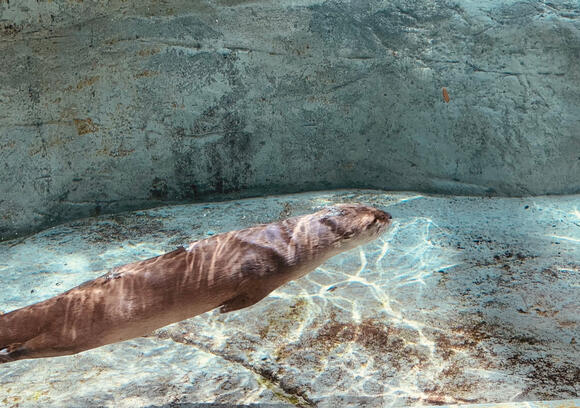 Working to beat the heat during our recent heat wave in Tennessee, I made my way to the Tennessee Aquarium in Chattanooga. The price isn't the cheapest but is reasonable for a family on vacation. General Admission tickets allow you access to both the River Journey of freshwater fish and animals, and the Ocean Journey, where you'll see salt-water varieties - and more. You can also purchase tickets to the Aquarium's IMAX Theater which has special shows at different times during the day for additional costs. We had done this once before when our children were little, but as they've grown we didn't take the time or expense to visit the IMAX showings this visit.

We were in southeastern Tennessee this trip on our way to Bonnaroo in Manchester. We decided to venture to the aquarium since we like aquariums, museums, and zoo visitation during vacations. With the heat wave upon Tennessee at the time, it was a perfect fit for our itinerary. The air-conditioned exhibits were fun and welcoming - both in the river and ocean journey buildings.

Entering the facility, after purchasing your tickets at the nearby ticket booth (You can purchase your tickets online here), you will have chosen your options between the River Journey or Ocean Journey buildings. In either case, you'll enter and go up an escalator (or elevator if you can't use an escalator) to the top of the building to start your adventure - just as a drop of water would. From the top, you'll begin your descent through different exhibits as your wind your way through the building.

You'll find plenty of places to stop and admire the fish and other wildlife, with benches to rest or wait on the rest of your party if needed. Restrooms are also plentiful, so no worries there. Keep in mind that many families will likely be there with small children. Some people aren't comfortable around excited youngsters and should consider the timing of their visit if this is the case.

The exhibits are done wonderfully and the thick plastic aquariums provide great viewing of the fish and animals as they make their way. Some areas have netting, such as in the lemur display. You'll also find it a bit warm and misty inside the butterfly exhibit.

About the Tennessee Aquarium

The Tennessee Aquarium's stated mission is to "connect people with nature and empower them to make informed decisions about water and wildlife."

Within their two buildings, you will trace water through its journey from the mountains to the sea. You will meet native animals that live in the area, as well as creatures that thrive in remote locations.

The Aquarium celebrates the biodiversity of the region through exhibits designed to engage patrons in preserving and restoring biodiversity through its work in the field. The Tennessee Aquarium Conservation Institute (the research program of the aquarium) has expertise in restoring freshwater ecosystems. Such work helps residents and communities appreciate the need for environmental health.

Roots of the Aquarium

Chattanoogans joined in a community planning process in 1984 called “Vision 2000.” The group's mission was to restore the vitality of downtown Chattanooga. The Moccasin Bend Task Force had recently been publicly appointed and was hosting meetings to discuss reclamation of the Tennessee River - focusing on public access and meaningful development at the waterfront.

Architectural students from the UT-Knoxville suggested an aquarium. The ideas were further developed in the “Tennessee Riverpark Master Plan.” The plan (published in 1985) called for mixed-use development, enhancement, and conservation in 22 miles of the Tennessee River through Chattanooga. Work began in the 1990s, and the Tennessee Aquarium opened in 1992, the Chattanooga Visitors Center in 1993, the Creative Discovery Museum in 1995, and the IMAX 3D Theater in 1996.

Chattanooga had been the recession-plagued industrial city Walter Cronkite called “the dirtiest city in America” during a 1969 CBS newscast. Chattanooga was able to shed its inferiority complex and basked in the limelight of media attention throughout the 1990s, appearing on the covers of “U.S. News and World Report” and “Parade” magazines. Chattanooga was named one of the most enlightened cities in America (“Utne Reader”); one of the top 10 family vacation destinations (“Family Fun” magazine); one of the world’s great cities (NPR’s “Morning Edition”); one of the country’s best places to live, work and play (“Outside” magazine); and was named one of America’s most walkable cities (“Walking” magazine).

The transformation of Chattanooga began in 1992 with the opening of the Tennessee Aquarium. As we left the Aquarium after seeing both buildings and all exhibits, we revisited the gift shops for some tokens to remember this wonderful destination.

When we finished making our purchases, we were famished. We found several nearby restaurant options that weren't just quick sandwich shops. We opted for the Big River Grille and Brewing Works. The prices were decent and the portions were perfect after a long day of driving and exploration.