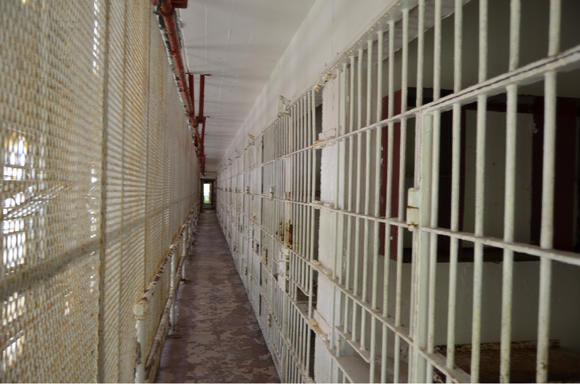 When the State of Tennessee closed Brushy Mountain Correctional Complex on June 11, 2009, it was a maximum-security complex housing some of the worst criminals in the state. Although the state never executed prisoners at Brushy Mountain, approximately 10,000 people died on the grounds. The majority of these were from coal mining, disease, and murders. There is a cemetery off-site and rumor has it that a Native American burial ground also exists in close proximity to the cemetery.

It is said many prisoners never left when the prison closed. Others who were never prisoners are also said to walk the halls and grounds of the complex. Since the prison was acquired by a private firm and turned into a tourist attraction, tours are given of the site, and paranormal tours are offered after hours.

End of the line

On our latest visit to the historic prison, we met Jamie Brock of End of the Line Paranormal, who conducts the paranormal tours of Brushy Mountain Prison. The land where the prison sits was purchased by the State of Tennessee for the prison from Brock's family (Armes family) in the late 1800s. The prison was initially built in the 1800s and opened in 1896 at the end of the Coal Creek War, where the state was using inmates to mine coal.

Brock says one of the stipulations in the sale of the property was that family members were to be offered employment at the site. She says family members worked at the prison until it closed. Brock continues the tradition, working as a guide.

Brock is a very knowledgeable guide for the site and points out many details that easily go unnoticed. Her southern charm and professional demeanor give credence to what many could call a marketing ploy. Brock says she gets people from all over who are interested in the paranormal, debunking stories of ghosts, wanting to see ghosts and every type in between. She also says many non-believers leave the site believing.

Brock says many people report encountering Spanish speaking people, Native Americans, and an older man with a hat, which she believes could be her great grandfather. A young woman has appeared in some form in the courtyard where the whipping post was once located.

Brock says there is a lot of paranormal activity in the cafeteria, where many inmates were killed, in "the hole" where many inmates suffered in dark silence, and on the third floor where men were shot and killed and two guards were held prisoner.

I thoroughly enjoyed our visit with Jamie Brock as she showed us around the facility and a few of her favorite hot-beds of activity. I do try to keep an open mind, yet I am a skeptic. Our tour was very informational and I enjoyed it, as did the experts I brought with me:

The two found many areas of interest and documented areas of their own interest for further research. As I filmed and interviewed Brock, I did get a cold feeling while we were in "the hole" and the hair on the back of my neck stood up after a few minutes - and I decided it was time to move on.

In another area when Brock was telling us of paranormal activity on the third floor, when mentioned two inmates named James who had been killed... and a voice said "I was one of them." I thought this very dramatic - until my battery on the infra-red camera suddenly flashed "battery dying" and the camera went dead. The camera came back to life when we returned to the entrance, and showed a half-charged battery. It may be a coincidence, but it gave me pause.

I hope you too will visit the Tourbrushy.com website and make your way to the historic prison. Check out the distillery, restaurant, gift shop, and fireworks stand. There is a lot to see and check out at the facility. You can book a guided tour with one of the former guards as your guide. You can also schedule a paranormal tour through the website here.