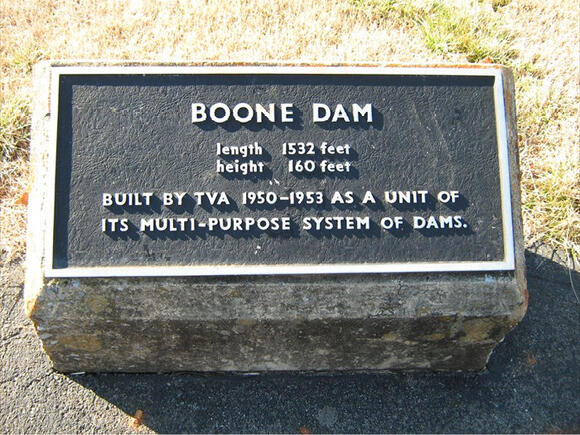 What Happened at the Dam?

In October 2014, a sinkhole was discovered near the base of the embankment at Boone Dam, with water and sediment found seeping from the riverbank below. The sinkhole's location and the muddy discharge were indications of possible safety issues at the dam, prompting the TVA to further investigate the situation.

TVA engineers found the conditions to be right for "internal erosion," where voids could develop within the dam or its foundation due to groundwater flow. As internal erosion is one of the leading causes of dam failures, TVA implemented interim measures to mitigate the risk of dam failure. These included:

According to TVA, the dam was designed and built in the early 1950s. Builders encountered highly irregular bedrock known as “karst,” consisting of local pinnacles separated by 20 to 30-foot-deep crevices, during the excavation of the foundation. Near the surface of the bedrock and within these pinnacles, in a part of the ground termed “epikarst,” they encountered voids and soft muddy soils. To limit reservoir seepage underneath the dam, a deep excavation called a “cutoff trench” was created to remove the voids and soft soils within the rock pinnacles and epikarst. Additionally, grout was pumped into the foundation to fill any remaining voids beneath the embankment dam. Although the foundation processes were state of the art in the 1950s, engineers know now how the process can deteriorate over time.

TVA discovered a well-developed, complex network of groundwater seepage paths coming from sources other than the reservoir in 2015. During large rain events, surface runoff flows underneath the dam and is a leading contributor to the observed seepage and sinkhole at the toe of the dam. This phenomenon occurs after large rain events and was discovered by the intense instrumentation program initiated in November 2014. Further investigation has confirmed that deterioration of the cutoff trench has occurred as seepage flows continue to undermine the foundation of the embankment dam.

TVA committed to repairing this dam right, understanding the serious impact on local businesses and property owners with the extended draw-down time of the lake for repairs. TVA worked with the community as much as possible to alleviate some issues during the draw-down, such as new ramp extensions, a new swim beach, and other activities to allow local residents to enjoy the water as work continued on the dam.

TVA completed repairs and is wrapping up the cleanup process from the construction. The lake is back to full summer pool levels as of May 20 this month - just over a week ahead of schedule, thanks to recent rains.

Residents and community leaders are excited to have everything wrapped up, all within the 7-year timeframe expected by initial TVA estimates. The community has also benefitted with:

The boat ramp extensions included roads, parking areas, and roadway improvements that benefit everyone. Businesses are resuming operations and we expect the heat of the season and the full lake levels to bring prosperity back to the businesses that were lucky enough to survive the seven-year draw-down.