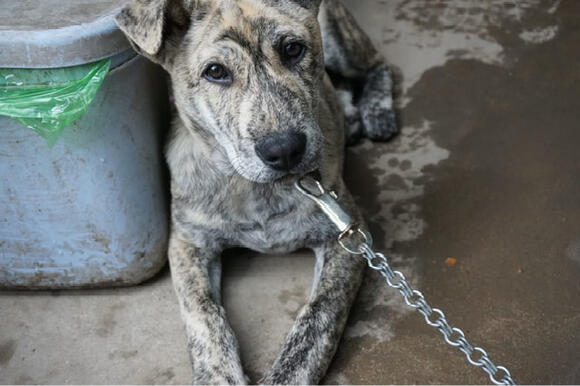 Animal shelters advocate for adopting laws and ordinances to prohibit chaining or tethering animals for extended periods outside. They cite the practice as being cruel, as it limits the movement of the animal, often preventing them from seeking adequate shelter, food, and water in many circumstances.

Shelters, humane societies, and animal rescue groups from across the region will come together Saturday, May 21 in Johnson City's downtown to host an "anti-chaining" event. The event is geared toward educating the public and inspiring change in both citizens and officials who are in a position to implement legal changes to put a halt to the practice.

"People that chain dogs, it's legalized animal cruelty. When dogs aren't socialized, or they get free a lot of people don't look for them, and then end up in shelters. The shelters are the ones responsible for trying to save these dogs." - Kevin King, Director - Unicoi County Animal Shelter

Tammy Davis, director of the Washington County-Johnson City Animal Shelter, says dogs have a better life when they aren't living on a chain. Davis says they want people to keep their animals, but to properly care for them and let them have the best life possible in their home.

Bristol, Tennessee, and Johnson City have anti-chaining (tethering) ordinances in place. Bristol's ordinance limits tethering in ordinance 10-46, and designates hours when animals must be off-tether, with an application process for waivers - should the owner be at work during the designated off-chain hours. Johnson City's ordinance 10-103 (4) also addresses the hours an animal may be tethered.

Shelter officials hope all counties and local governments will adopt similar measures for the safety of animals. King says chained dogs are something they encounter daily. The practice creates a cycle where the animals either break free, create unwanted litter, or become emotionally distressed and anti-social. Emotionally disturbed animals and those who are anti-social aren't usually adopted when they make their way to the animal shelters.

King added that the chaining of dogs is something they encounter every single day; and it perpetuates vicious cycles at local shelters as many dogs break free from their chains, run free and have unwanted litters. Many dogs also end up emotionally distressed and anti-social after being chained and wind up in shelters as dogs that are not adoptable.

The Anti-Chaining event will occur at King Commons Park from 11:00 a.m. to 4:00 p.m. on May 21, 2022. Shelter leaders are hoping the community will come out in support of the movement. The event will feature local vendors, education events on animal welfare, and food trucks.

Davis says it is a great way for the public to know the shelters are united on this front and hope the public will go forth and bring this to their local community leaders to move things forward.