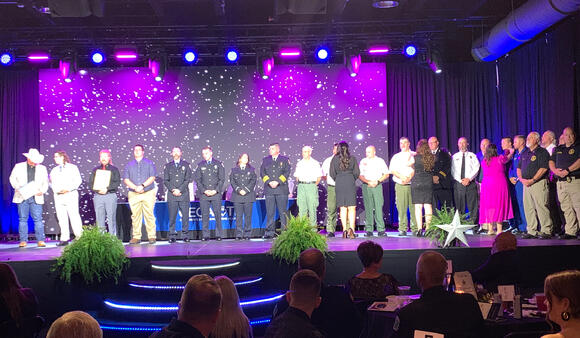 Local first responders recognized at the State's 2022 Star of Life Awards banquet on May 4 at Rocket Town in Nashville, Tennessee. The responders were recognized along with Taylor Skinner, the survivor of a motor vehicle accident requiring the crews to work together to save the man.

Emergency responders responded to a motor vehicle accident involving Taylor Skinner, who went over an embankment and required multiple agencies to come together for lifesaving efforts to save him. Taylor had left the roadway and traveled 85 feet down into a ravine, landing his vehicle in the water.

Pinned and submerged partially in the cold water, the hour long extrication was completed, allowing responders to carry Skinner up the embankment where his emergency treatment continued. He was flown via Highlands Emergency Air Rescue and Transport to Johnson City Medical Center's Trauma Center, where care continued.

Skinner was present at the awards ceremony, and thanked his responders. He was presented with a certificate of life for his heroism is fighting for life and posed with the responders for photographs afterward.

The emergency response effort was a tribute to the emergency medical services, rescue squads, EMA, and fire services across the state. EMS Director Jason Murrell was on hand, along with Assistant Director Paul Lutz, to congratulate the responders for their courageous efforts and receipt of the award.

Personnel involved in the rescue include:

The Police, Fire, Rescue, and EMS personnel were all instrumental in a successful outcome for Skinner. The people of Hawkins County are well represented with people who care for their neighbors and serve their communities.