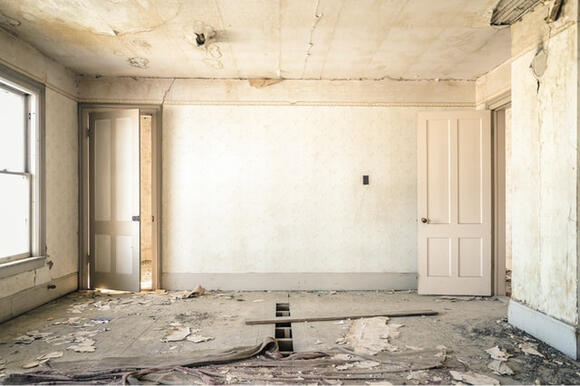 The home owner at 1452 Vance Tank Road in Bristol, Tennessee says he's had multiple setbacks in the cleanup and renovation of his rental property. Johnny Dabbs, the owner, says he has faced delays from roofers, heating and air contractors, suppliers, painters, and even Serve-Pro who was contracted to do the inial clean up.

Dabbs says the fire in his property was caused by a fire in the dryer line, when tenants failed to maintain a clean lint-trap. The dryer vent ran under the house before venting out the back of the home. Dabbs says the design wasn't his, and he is correcting some design issues while renovating and preparing the house for habitation again. His biggest problem has been with finding supplies due to supply chain issues, such as with ductwork adapters and parts, and contractors who will show up to bid and follow through with the work contracted.

Dabbs says he contracted with Serve-Pro to do the cleanup from the fire, and there were multiple delays in before they finally came through and cleaned up most everything up. He says an additional delay had him waiting for them to pick up their trash and haul it away. Dabbs says it's been one thing after another. The skilled trades people who've been contracted have done an excellent job - the roofers, electricians, and others.

While he has done what he could to keep things moving and doing a lot of the work himself to save money, the work backlog from the contractors has kept him two months behind schedule. Dabbs sings high praise for the Farm Bureau and their adjuster (Tennessee Farmers Mutual Insurance Company). He said they were on site within a couple of days and worked with him to arrange financing of repairs in a very timely manner.

The homeowners are the ones behind the eight-ball in these scenarios. They are suffering from the overworked and overscheduled contractors who are doing their best to get the work done. In speaking with Serve-Pro of Bristol and J. Smith contractors, they both report being undestaffed in spite of constant advertising for new employees. Electrical and plumbing contractors are advertising on billboards and radio too looking for both experienced help, and anyone with an interest in being an apprentice. Many of these job opportunities come with a sign on bonus and a list of benefits. The people just don't seem to be there to find.

As with Dabbs, mechanical and other contractors too are looking for materials and supplies to prepare jobs and finish them out. The roofing contractor was delayed on the Vance Tank Road job for a couple of weeks due to weather, and another two awaiting supplies for the base layer.

The workforce and supply issues are both impacting the economy's ability to fire on all cylinders. It doesn't help that gasoline and other materials required for business have also risen more than the regular rate of inflation.

Speaking with the contractors and homeowner, they say to allow at least an extra two months to complete any job due to unforseen issues with obtaining supplies or materials, and to allow for sudden changes in the available workforce. One or two people out sick can put a whole crew a week behind schedule these days.