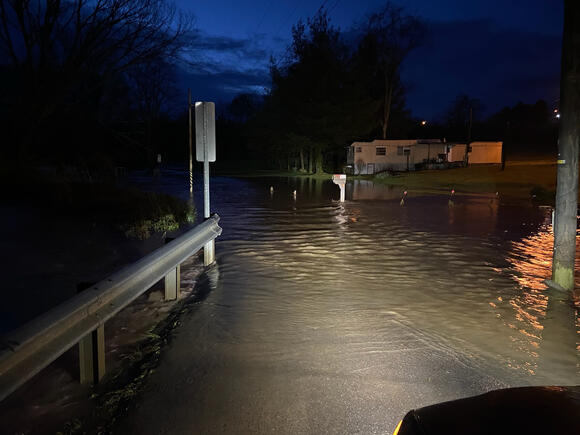 The rain trains across the Volunteer State have led to flooding across much of Tennessee this week. Many rescues have been reported across the state associated with the flood waters - including one water rescue in Hawkins County, Tennessee.

WJHL reports many roads are impassable across the Tri-Cities region due to widespread rainfall last night. One of the areas which flood often in the eastern part of Sullivan County is the Whitetop Creek area along Vance Tank Road, upstream of Sweet Knobs Trail and Tennessee Highway 394.

The creek routinely floods the area from Lazy Acres to Wampler Road, coming into the back yards and near the homes in many areas near the creek. One home nearest the creek floods often in its basement. Thankfully the home's main living area is on the main floor.

Residents along Wampler Road believed State Highway 394 would cause a dam effect at the onramp at Sweet Knobs Trail. Local property owner Morris Dabbs says initially it did act as a dam during the flood after the construction. He says this was due to debris clogging the flow, which has since been remedied by the Tennessee Department of Transportation.

The amount of runoff from the development on the eastern side of the side of the railroad running parallel to the Vance Tank Road is believed to contribute the increased flooding South of Wampler Road. The development involves a new business park in the area of the Bristol Herald Courier's new facility off TN-394.

The impact of has been minimal, effecting only one or two homes, regardless of the reason. The Sullivan County Highway Department and Tennessee Department of Transportation have both worked toward mitigation of flooding in the area. The main culprit would appear to be the landscape and natural runoff from Whitetop Knobs, which both feed into Whitetop Creek to the East and Beaver Creek to the West.

The same flooding which had the Sullivan County Sheriff's Office closing an area of Vance Tank Road and Wampler Road last night, often causes flooding in the Bristol Motor Speedway campus, as evidence last spring during the dirt racing weekend at the Speedway.

Residents in the area have learned to live with the occasional inconvenience caused by the flooding, as it is normally short lived.