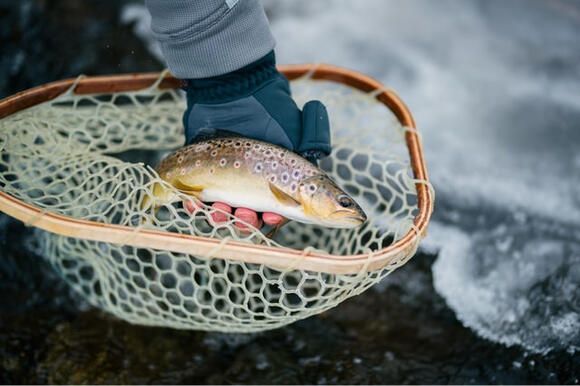 The South Holston River is known for trout fishing action. The cold tailwaters of the South Holston Reservoir are home to trout year-round and anglers in search of them. Rainbow, brook, and brown trout can be found along the river. It's told "the South Holston has 10,000 browns per mile."

Most people don't know it, but fish usually bite better in the winter. Many people enjoy fishing in the winter because they land bigger fish. Many local and visiting fly-fishing anglers fish near the weir dam at Osceola Island. There is also much less competition, as you'll mostly find the die-hard fishermen out during the colder months.

I personally alternate between a fly-rod and ultralight spinning reel with a 4-pound test. I like using a float and medium wet fly. I also like to use salmon eggs and Power Bait at times, though usually, I try whatever is working.

Tennessee trout seasons are liberal, with year-round fishing in most places. Many areas do have special regulations and seasonal limits across the state. This holds true for the South Holston River too. Know your local fishing regulations, and where you plan to fish.

More detailed information can be found on the Tennessee Wildlife Resource Agency’s (TWRA) website at https://www.tn.gov/twra/fishing.html. You may also find notices posted near major fishing areas.

About the South Holston

The South Holston River is a premier trout destination, home to over 8,500 fish per mile. Roughly 85 percent are wild brown trout. These brown trout have a growing population, and some reach a respectable size. Several brown trout have been caught weighing in at more than 10 pounds.

Regulations identify fish between 16 and 22 inches as protected and must be released. The cold water and oxygenation provided by the weir dam have browns growing to great size. Rainbow trout are regularly stocked in the river by the TWRA. The cold water and oxygenation work together with a stream that doesn't fluctuate much during the changing seasons. This provides a great habitat for a year-round trout fishery.

East to the Watauga River

Just across Holston Mountain in Carter County, the Watauga River is also home to many brown trout. In fact, TWRA doesn't even have to stock them now. Anglers looking for bunkers should give the river some heed, as some record-breaking fish were caught here recently.

Even with so many brown trout, the river is also home to a decent rainbow trout population. These trout draw anglers from across the state. In one part of the Watauga, a section of the river is designated a "quality trout section." Fishing is only allowed in the designated area with artificial lures and has other restrictions.

Tennessee is a beautiful state. It isn't known for trophy-sized trout, but there are plenty of lunkers in these waters. No matter your preferred fishing method - fly fishing and spinning rods have both produced results for anglers - both young and old. Many people have landed the fish of a lifetime here.