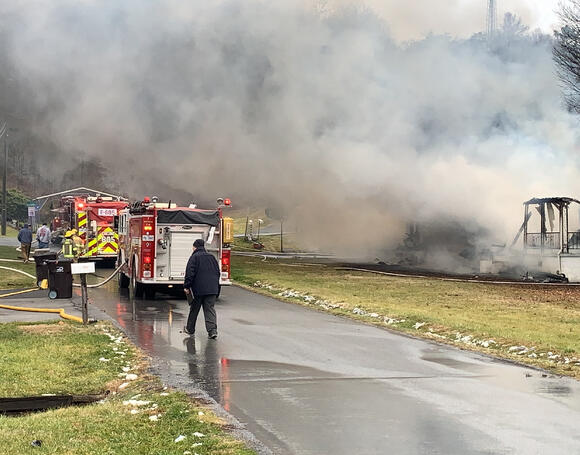 Devestation and loss on Cedar Road

Sheriff’s deputies and firefighters helped remove one person from the scene. A second person was unable to be removed. The person had a history of ongoing medical issues requiring extended treatment, according to neighbors.

A neighbor at 135 Cedar Road said he heard what could have been an explosion. Law enforcement, fire, rescue and EMS vehicles inundated the small community for a couple of hours this afternoon. Travel beyond First Avenue was impossible.

EMS and rescue from the Hickory Tree area arrived on the scene and began caring for the patient, treated continued on the scene until a second ambulance and rescue truck arrived from the Bluff City area. The patient was transported to the hospital for further emergency care.

Bluff City Rescue Squad and the second Sullivan County EMS ambulance remained on scene. The mobile home was a total loss. Matt Kegley of East fire department served as incident commander, directing suppression and rescue efforts. East fire chief Code Cross was also on scene. This is the second house fire this week within about a mile of each other in Eastern Sullivan County.

Sullivan County Sheriff’s Office is investigating the fire. This is common practice house fires and when a death is involved. The condition and name of the patient transported were unavailable at press time.