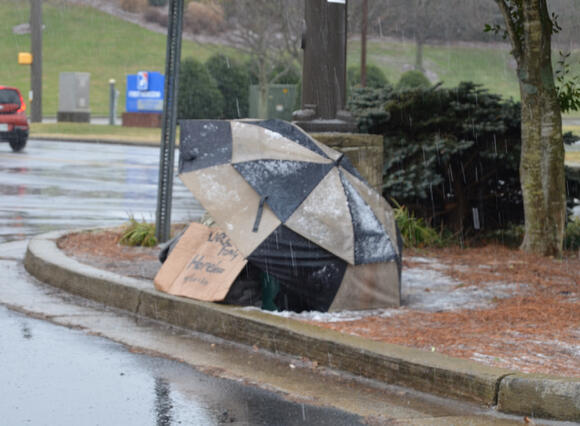 Many of us were staying in most of the day Sunday as Winter Storm Izzy dropped freezing rain, rain, sleet on snow on us throughout the day. Many of us woke to find our cars and driveways covered in a layer of ice.

Our team made our way across Johnson City and Washington County in late morning and early afternoon to access road and weather conditions. Seeing much of the ice thawing and the precipitation changing to rain and snow, we expanded our excursion to see how the homeless were handling the weather.

We found a homeless person with a sign asking for help in the Peoples Street area. Many homeless are often found in the vicinity of grocery stores and restaurants. Today was no exception. The number of homeless people we saw were fewer due to the incliment weather, as many others were also presumably seeking shelter.

Emergency Services employees tell me many of the homeless aren't allowed into shelters if they are intoxicated or smell of alcohol. The tell me many also have issues with this because they drink alcoholic beverages to help stay warm. Many also drink mouthwash, or other alcohol based liquids when they cannot afford alcoholic beverages. These people are forced to find their own shelter. They may seek refuge under bridges, drainage tiles, and thick underbrush to camp. As the snow began to fall, we found another homeless camp near the railroad tracks off of West Walnut Street. The area has also seen many more camped in the same area, from the items found nearby. We didn't disturb the occupant, and officials discourage everyone from approaching homeless camps for safety reasons.

We can see the second homeless person is better prepared to handle the weather than the first one we encountered. Hopefully they also have suitable shelter elsewhere, or will be able to seek shelter in one of the city's havens for the homeless.

Rains are expected to continue throughout the evening, with the possibility for some snow accumulation. Colder weather is expected over the next few days. Should you be in the position to contribute to the shelters in our area, please do. Most of our areas homeless are not in the situation by choice. Many are transitioning through hardships in life and trying to get back on their feet.

Those interested in learning more about the homeless in America, should read the NYU news article, "The 12 Biggest Myths about Homelessness in America."