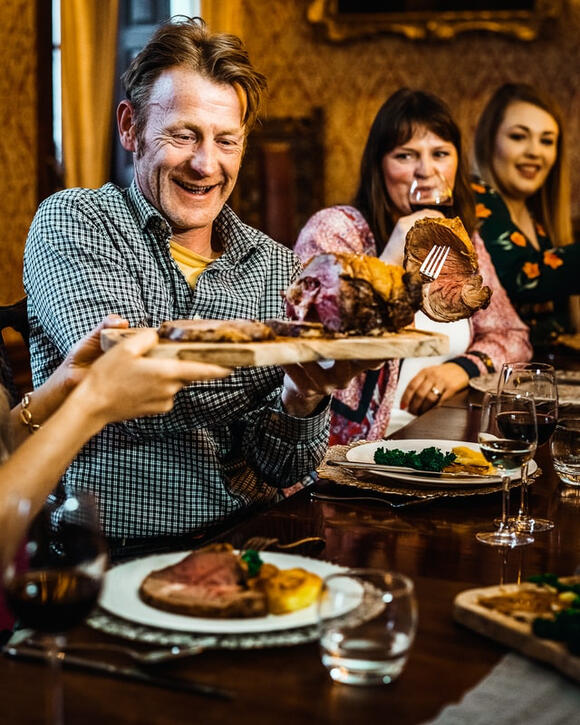 Many locations have traditional ways to jumpstart the new year. In the southeastern U.S., we have our traditions, just as other countries and even other parts of the USA have theirs (no matter how wrong they might be... just kidding). In Tennessee, you might find black-eyed peas, greens, pork, and cornbread as part of the typical menu. Here's a rundown on why some of these foods are eaten for luck, and their symbolism. Maybe it's not too late to eat some now to make sure we're going to have a better year than the last two. As for me, I typically feel lucky anytime I'm eating a steak and baked potato.

These New Year's Day foods are said to provide luck to those who consume them on the first day of the new year. These foods are a part of tradition and folklore.

Peas, beans, lentils, or even black-eyed peas are said to symbolize wealth (or coins). Traditionally these are to be made in a dish. The dish should be seasoned with pork (ham, bacon, sausage, etc.)

The type of greens doesn't appear to be important. Greens are chosen because they resemble paper currency - folding money. There are many dishes with greens. You are likely to see boiled cabbage, sauerkraut, collard greens, kale, chard, mustard greens, turnip greens, spinach... you name it. My personal favorites are boiled cabbage or collards - seasoned with garlic, olive oil, and bacon bits.

Pork is considered a sign of prosperity in many cultures because they are fat and root forward. You'll find variations in different areas. These can be pork shoulder, ham, pork roast, baked hams, pork barbecue, ribs, and other favorites.

In my family, we traditionally ate corned beef. I had to look this one up and found the details in an article on HubPages. The Corned Beef (salted beef) was discovered by Irish immigrants who found it similar to the salted pork they used in their native land. The corned beef was affordable and accessible to the working poor in America, so it became an Irish-American dish.

The Irish typically ate corned beef with cabbage. The Irish typically grew and ate cabbage, and began domestic cultivation as early as 600 BC, even before they began raising potatoes. It had fallen out of favor as potatoes were adopted in Ireland until the Great Famine caused by potato blight when it regained prominence to feed the people. Even so, 10% of the people died due to the famine, with another 10% immigrating to the US. Now even the poorest among them can usually afford corned beef and cabbage for luck.

This one struck me by surprise. Cornbread may be chosen because it symbolizes gold, or just because it pairs well with black-eyed peas, greens, and pork roast. In an article by The Spruce Eats, they say other cultures eat fish, grapes, doughnuts, cakes, and other treats with special treats. I am thinking they are referring to fruitcake here, but that's just me.

Supposedly the round shape is recommended (as with skillet cornbread or donuts). It is supposed to signify the year as coming full circle, completed. This is to give us new hope for prosperity and the circle of life to continue.

The Spruce Eats article also says you should avoid backward-moving animals, such as crayfish or lobster. You don't want your luck backing up on you. Winged food, such as turkey, chicken, duck, and the like should also be avoided so your luck doesn't fly away - and chickens scratch backward... no going backward in life for us.