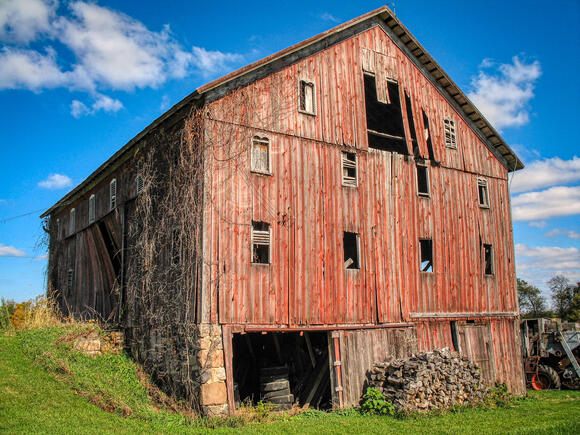 Family farms are dead or dying

My grandfather's farm - Whispering Pines Farm has been divided up after his death, and portions sold off. The barn has since been torn down and the old tobacco greenhouses were derelict and fell on their own, as did the hog pens and chicken coops. It's amazing at just how fast Mother Nature can reclaim farmland and buildings once they've dropped from productivity.

The same can be said of Whitetop Creek Farm, my father's farm of over twenty years. The modern metal greenhouse is now a sanctuary for honeysuckle vines, which have taken over everything in it. The barn is now gone, as are the the hog pens. The abandoned chicken house still stands, as does the tractor shed. Both of these structures are now more home to junk storage than anything else.

I once dreamed of owning my own small farm. I too wanted to be independent and have my own cattle, chickens, and grow my own crops. I used part of my dad's garden area for a while - but I couldn't get my wife at the time to help, and our children too small to be of much help. I managed to grow plenty of salad fare in a section of the greenhouse I was allowed to use, but never had time to handle more than a few chickens at a time or get involved with larger livestock. I really did want to start raising Scottish cattle, which graze more lightly than the heifers my grandfather and dad used to raise. Such is life.

As I am nearer to retirement, I find myself looking back on the work around the farms with nostalgia. The work doesn't seem as bad from a distance. I've helped erect acres of fencing and plowed many acres during my life. Putting up hay and tobacco during my youth made me strong, and also had me forging my path into college. I'd seen hard manual labor, and didn't want to resort to such life for a living.

Sadly, the abundance of subdivisions and new housing around the county is looking good for progress, but it has taken quite a bit from the rural, agricultural atmosphere we lived in growing up. I bought my childhood home from my parents and live adjacent to where the family farms were. My oldest son now owns my grandparent's old home and rents it out. He's inherited the old greenhouse with an abundant crop of prolific honeysuckle, and has managed to scatter quite a bit of nostalgia and junk around the property. It no longer resembles a farm at all.

I've thought about reimagining our family farm. On my two-acre lot, I could raise some goats in one area, a few chickens, and I've even thought about raising a few crops in some raised beds in the front yard near the house. My wife would be willing to help me, I'm sure... though I'm thinking I'd better start with some nice looking and attractive raised beds near the house, which I should keep neatly trimmed and mulched for eye appeal.

New methods of growing plants have allowed us to raise crops more efficiently in confined spaces, thanks to work by Mel Bartholemew's Square Foot Gardening, and hydroponic work I was able to see first hand at Johnson County High School's vocational wing. My father had once envisioned putting an above ground pool in one end of the greenhouse to raise fresh-water shrimp. I don't think I'll go that route. I plan to opt for a more traditional and smaller scale operation to feed my small household. All of our children are grown and now living on their own - so it's just me, the misses, and a few pets.

I can't help but feel sadness as I drive through the countryside. Everywhere I look I see farms that are gone or merely a shadow of their former self. Fleenor's Dairy, Johnson's Poultry Farm, Fleenor's Poultry Farm, Carrier's Cattle Ranch, Wampler's Farm, Jackson's Farm, and Bushong's farm. They all sit idle and deteriorating, abandoned, or split into new subdivisions.

Life has changed quite a bit in Sullivan County over the past 50+ years. We need to capture the memories and history of what helped make this part of the state, and USA, a great place to grow up.