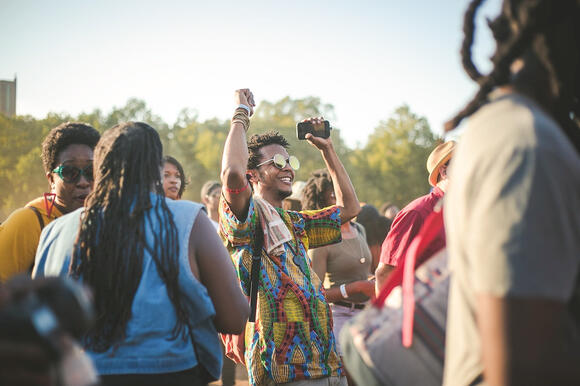 The one-day Umoja Festival is today at King Commons Park in downtown Johnson City. The unity festival was pared down due to COVID considerations, but is still alive and well. This is quite a feat considering the even more popular Blue Plumb Festival was cancelled earlier this summer, and the delta-wave is coming on even stronger for Tennessee.

You'll find arts, crafts, entertainment, and vendors of all sorts at this year's event in Johnson City. Though the festival is a bit smaller in scope, we anticipate the turnout will be decent and the weather is definitely cooperating with sunny skies and moderate temperatures throughout.

Unity is the name of the game with the Umoja Festival. Umoja is actually the Swahili word for "unity". This regional event serving the Tri-Cities area has a history spanning more than two decades of celebration.

Local members of the NAACP joined with Herb Greenlee at the Carver Recreation Center, along other community leaders to hold an annual unity picnic as early as 1978. Traditionally, they held the picnic near August 8th weekend each year. Attendees would enjoy games, covered-dish items and other foods, along with lots of home-spun fun.

Umoja Festival organizers say the picnic faded out. In 1997 a handful of the original founders revived the idea, transforming it to a festival instead of just a picnic. They saw themselves as "keepers of the dream." They went forward with the purpose of integrating the event and welcoming everyone. Their goal was to eliminate barriers of race and culture - pulling the entire community together.

The revival of the picnic's heart brought the new name - Umoja (or Unity Day) Festival, with a central theme of universal love of life. The new spirit of unity brought forth a festival with a variety of foods, craft, and other vendors, along with even more entertainment that were welcomed by the thousands of attendees from all walks of life, races, and cultures. They would close out the three-day festival with church services on Sunday.

The festival held traditionally at the Carver Recreation Center was flooded new attendees. The unwelcome attendees only consisted of weather. When it rains - it pours... and it did, flooding the center's grounds. The festival was forced to relocated to Freedom Hall.

One might say the promise of hope at the end of the storm's rainbow was even more expansion. Even more vendors, attendees, and churches came knocking - upwards of 6,000 at a time (according to the Umojajc.org website).

The festival related in recent years to downtown Johnson City. The festival is able to spread its wings and provides more ample parking and an even more festive atmosphere (if possible). The influx of people to the downtown area is a draw for more city, with downtown businesses having a chance to embrace the festival and take in more business as well. The transformation of the downtown area with open area parks for deal with urban flooding plays a role with the festival, having grassy park areas to set up for many events.

Recent numbers place attendees around 30,000 annually. The festival provides an area to showcase the different artists and vendors serving the region. You'll find information booths on history, culture, medical screening and much more. There are fun and games for everyone. The best part - the price is right. The Umoja festival doesn't charge for admission, but will accept donations to help offset their costs.

With recent unrest over the past few years, with differing factions protesting current events, or marching in support of causes. The Umoja festival embraces the diversity of opinions and cultures, working to share opinions while respecting the individuals. This year's festival is a day of remembrance, as it falls on September 11th. It kicks off with a 9/11 salute by ETSU and the Johnson City Police Chief.

It is quite fitting, seeing as how we are all so united on 9/11 and its wake, as we dealt with the aftermath. The Umoja Festival brings people together. Maybe they can show us all a way to stay together.

Thunder Reins in Bristol This Weekend

Drawing the Lines - How the 2020 Census Will Affect Tennessee

What's Locked In the Trunk for Halloween

The Special Bond in some Single Parent Homes

Single parents are becoming a larger segment of our society in the United States. Whether from divorce, no marriage, death, or what ever may be the case, the number of single men and women becoming a the sole parent is on the rise.