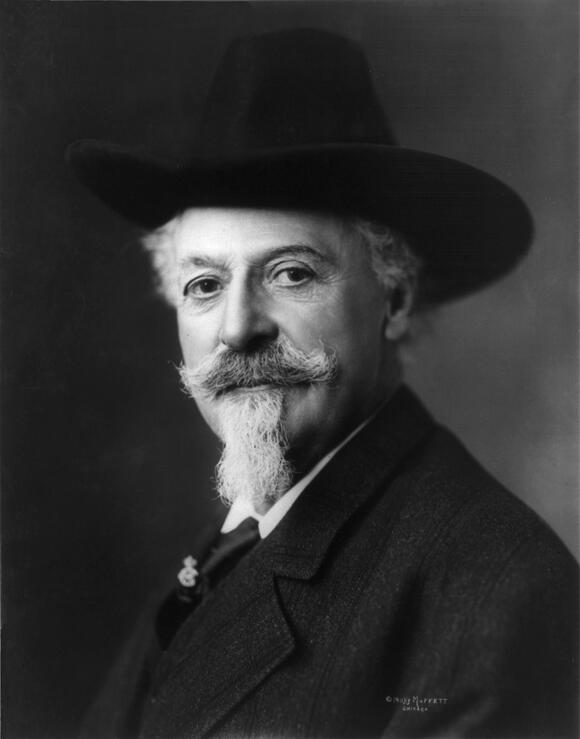 You may know him as "Buffalo Bill". William F. Cody's final resting place is on Lookout Mountain, in Denver Mountain Parks. The man of fame and notoriety was lain to rest on the mountain overlooking Denver, Colorado, as his last request. Earlier he had said to bury him in Cody, Wyoming.

Upon visiting his grave and museum while in the Denver area earlier this week, I learned of the man I only thought I knew. He was not the person I thought of as a youngster. He was a generous, honorable man who was fair and respected.

William (Bill) Cody was born into a family who believed in the rights of others. His father died when he was young speaking out against slavery, being knifed multiple time during a public speech. He died of his wounds when young William was a boy. He held his father's values. He went to work early to help support his family. He worked for an early version of what became the Pony Express, and became a hunter for the railroads. Bill would hunt and kill enough bison to feed the railroad work crews, as they built the railroad tracks across the west.

He was not a savage killing bison for sport, fun, or malice. He was shooting just what was needed to feed the working men on the railroad construction crews at a time when the bison roamed the plains of the west by the millions. He did not lead to their demise. His prowess as a hunter did give him the moniker "Buffalo Bill", for being able to bag the meat his job required.

Bill worked for the U.S. Army as a civilian scout during the Indian Wars. His valiant efforts and hard work in the west gained attention. He was awarded the Medal of Honor for service to the 3rd Cavalry Regiment for his actions at Platte River, Nebraska. He was cited for "gallantry in action" at Loupe Forke.

Congress revoked Cody's medals in 1917, as it did with over 900 others. The U.S. Congress retroactively tightened the conditions for which medals could be awarded for honor. The Congress stipulated that only military personnel could receive the Medal of Honor - and scouts were a civilian position at the time. Of the 910 medals revoked at the time, five scouts lost medals that year.

The Army Board for Correction of Military Records ruled in 1989 that Cody and the other four scouts had their medals reinstated. The board of correction has the discretion on administering policy decisions on awards. They decided the medals revoked were well deserving and reinstated.

Buffalo Bill became famous when he happened to meet up with a famous author out on the trails in the west. The author, Ned Buntline wrote dime-novels and was looking to branch out into another direction. He found Mr. Cody a colorful character, as he recounted some of his exploits as a guide, hunter, and dealing with the American Indians. Buntline began writing fictional stories of the exploits of "Buffalo Bill", and he became famous around the country in short order.

This led to Cody creating his Wild West Show, where he incorporated talented people of all genders, races, and nationalities. He was often said to have paid everyone equally, believing the work one days is due the same wage. It didn't matter if the person was a woman, or not a white person - he paid them the same wage he would have paid a man.

Cody died in Denver. He was a member of the Elks and Free Masons. They both participated in his funeral and burial. His wife honored his last request and laid him to rest on Lookout Mountain in Golden Colorado. After her death, other relatives challenged his wishes and their were disputes as to whether he should be moved to Cody, Wyoming - a town honoring him with its own name. His grave was sealed with several feet of concrete to keep people from moving him from his last resting place.

Johnny Baker, Cody's "adopted son" (actually a foster son, Baker was never formally adopted), was taken under Cody's wing and nurtured after he joined the Buffalo Bill Wild West Show. Baker was about the same age as Cody's real son, if he had not died of illness. After Cody's death, Johnny Baker helped fund and open the Pahaska Tepee as a museum dedicated to the life of William F. Cody.

Baker donated many of the works from his own collection of memorabilia from the show and personal items. The museum expanded into a restaurant and gift shop, outgrowing the original building. A dedicated museum was erected adjacent to the Pahaska Tepee, with an observation deck and walkway to the gravesite.

The museum does a great deal to help people understand the real William "Buffalo Bill" Cody. It dissuades many stereotypes which had been ingrained in the culture by dime novels and fictional movies. The stories and events depict the real life of a man who honored and respected the Native Americans, and people of all walks of life.

The gift shop is full of memorabilia portraying the natural beauty of the area, and the western way of life. The snack-bar / restaurant offers great fudge, coffee, and other consumables which are pretty good for an out of the way place. The panoramic view from the observation deck is inspiring. We watched hawks soar and parasails float through the air beyond the cliffs.

Golden, Colorado and the Denver Mountain Parks can be very proud of the park they have maintained around the "Buffalo Bill Museum & Grave". If you are in the area, I highly recommend it. It is a learning experience that people of all ages can enjoy.