Rocky Mountain High Is Not What I Anticipated 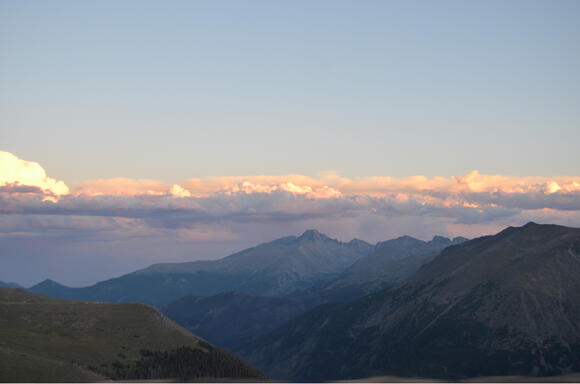 The Rockies are not what I expected. Maybe I'm not sure what I was expecting exactly, as with Yellowstone National Park. We arrived to find there were more than one entrance to the park. A vast wilderness with rocky peaks and lots of trees were before us.

I expected this. I did not expect the large swaths of wildfires from earlier years to still be visible. They are. We were excited to see a large herd of elk, and some deer during our travels near the area recovering from wildfire. The herd of young males and many females ambled along the roadway, looking on as they ate and gazed at the stopping cars. Many people had pulled off with us to photograph the beautiful mammals. A large bull did not present until we were making our way back across to the tundra.

Making our way toward the high altitude visitor center, movement near the edge of a clearing in the forest caught my eye. Slowly making his way from the tree-line was the largest bull elk I'd ever seen. His rack was enormous, just like his body. It was this instant that I seriously regretted not bringing my larger telephoto lenses for my Nikon DSLR. He seemed relaxed and unhindered by our presence, some 2,500 yards away. He was a great specimen.

As we climbed higher toward the high visitor's center, I spotted another herd of either mule deer or elk, in the upper part of the valley below the roadway. The sun was beginning to set and we weren't able to see them more than a moment, due to the curvature of the road. We were lucky to see them for even that short a time.

We wondered a path near the Junior Ranger Headquarters, traveling nearly a mile, enjoying the warm air and foliage. We didn't see any wildlife here - other than a bird or two. We also stopped along another short trail which told of the wetlands in the park, and how valuable they are to the wildlife in Colorado - even with their small footprint within the state. We'd hoped to see a moose while here, but no such luck.

Our travels through the Rocky Mountains National Park yielded elk sightings. We were very excited, and upon returning to our hotel for the evening in Estes Park, we saw a group of six along the street, walking in the same direction - toward our hotel.

We'd hoped to see some bear (grizzly or black bears), and moose during our travels out west to Yellowstone and Rocky Mountains National Park. We did see mule deer, elk, pronghorn, and bison. This made it all worth while.

The highest point in the Rocky Mountains National Park is Mount Elbert in Colorado, at 14,440 feet. The national park even has a high altitude (Alpine) visitors center. Located at the top of Old River Road, the Alpine Visitor Center is nearly up in the sky. A stop here will give visitors access to the alpine tundra.

The Alpine Visitors Center has snacks, drinks, and souvenirs available. Due to its altitude, it is only accessible in the summer - generally between Memorial Day and autumn, depending upon weather and road conditions.

I was surprised to find the Rockies not as commercialized as Yellowstone. The absence of stores, gas stations, and large lodges within the park was refreshing. Rocky Mountain National Park was more rugged and appeared more pristine. It may have to do with its location. There are more tourist towns in the vicinity geared toward skiing and upper tier clientele than in Yellowstone, other than the southern area at Jackson.

All in all, it was a wonderful trip. One that I'd advise anyone take. You should take your family too if possible. Plan on going in the summer months, and ready to hike and explore the wilds.