Yellowstone - More Than a Paramount Hit 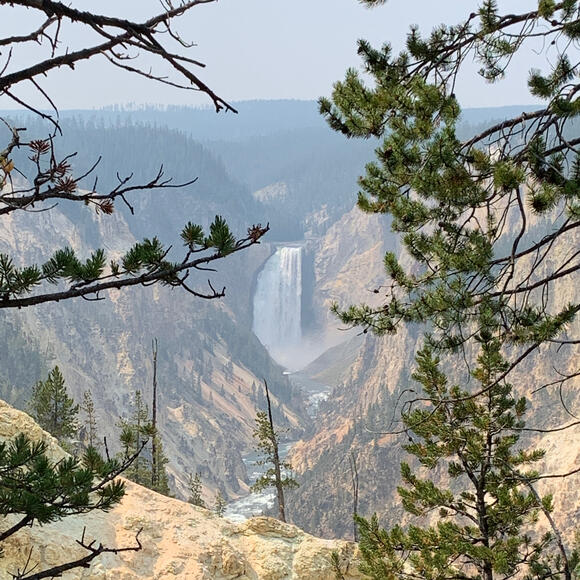 Yellowstone is a hit for Paramount. Before the Dutton Ranch and Kevin Costner made the name synonymous with a streaming television series, the first national park in the U.S. had already made a name for itself. The park is the largest in the lower 48 states and is one of the most heavily traveled during the tourist season. At 3.8 million visitors annually, it isn't quite a third as popular as the Great Smoky Mountains National Park. Then again, Yellowstone is a destination. It isn't near the bigger cities or as accessible as the Smokies.

Old Faithful and other thermal features in the park make it one of the more notable parks in the U.S. it's also home to the largest super volcanos on record. Supervolcano is not the appropriate term. It is actually a Caldera - a large volcanic area almost as large as the national park itself. The caldera is stationary, while the North American plate continues to move to the southwest - in agonizingly slow fashion. Scientists predict it will not erupt again in our lifetime. More likely it will flow lava.

When Yellowstone was made the world's first National Park, it was touted as being free of human influence. There were actually several tribes of different Native American nations who traveled through the area. They are not afraid of the area - they have a healthy respect for the power it represents in its mud pots, geysers, and other features. They give the area respect, and held many ancient ceremonies and rituals within what is now Yellowstone National Park.

Now it seems the Geysers are a sideshow. The Old Faithful Lodge and visitors center is one of the largest in the park. There are several rows of benches around the geyser, where people wait to see it erupt on a semi-regular schedule.

There is quite a bit of wildlife in the park. It is good to know that most of it will not try to eat you, given the chance. Only the rare Grizzly, wolf, or mountain lion should really concern you. The others large animals are just capable of badly hurting or killing you without wanting to eat you. The bison, pronghorn, elk, deer, mountain goats, black bears, and moose are generally more mild tempered.

During our visit, we did not arrive in the park until nearly 10 A.M. - which is not prime time viewing of active wildlife. We did manage to see hawks, eagles, mountain goats, bison, and quite a few deer. I think I had a fleeting sighting of an elk cow, but no bulls.

We saw many large bison during our trip. We also saw some large herds of bison in the distance at times. As we were making our way to the park, a herd of Bighorn sheep blocked our path while coming down Bighorn Mountain.

What surprised me most about our visit to Yellowstone, even though we went at the end of August, was the number of people and the amenities available. The crowds did not appear very large on the roads within the parks, but the villages, shops, overlooks, and restaurants were fairly full.

I was pleased to find they had information centers, a general store, gas stations, garages and tow-trucks for vehicle help. I wondered how they managed to care for the number of people in the park. There are also clinics for medical care and ambulances as well. I would imagine they call in helicopters to fly out serious conditions.

The views are spectacular and image worthy in most all areas of the park. If you make a visit, plan to bring your cell-phone for use as a camera, and any good quality dedicated camera you might have. If you have room for a zoom or telephoto lens, I'd bring them as well. The wildlife will be captured better with a zoom lens, keeping you out of danger and not scaring the animals too.

When using your cell phone for a camera, keep in mind there isn't cellular phone coverage in many areas of the park. You may wish to keep it in airplane made unless using the internet or making calls, to conserve you battery.

When taking photos with your phone, beside to while the lens with a clean lint-free cloth before taking the shot for best results. Also, it is a good idea to have someone act as a spotter for you when taking photos. It is too easy to get distracted and not watch your footing, or surroundings.

The scenes within the park are spectacular. Yellowstone is also to the largest high altitude lake in North America, situated at 7,733 feet above sea level. It's cool, clear, and even with its cool temperatures, there are thermal features spewing steam just yards away.

We made our way out of the park late, and exited the south entrance into Grand Teton National Park. This too is a view you have to see in person to truly appreciate.

The haze was too thick to get a proper photo and the light was beginning to wane. The above photo was doctored to add color and sharpness.

We ended our day looking for a place to eat and find a place to stay the night. We hadn't made reservations before and the spotty cell-service made things difficult. We made our way to Jackson, Wyoming. Here we found most all hotels booked and everything pretty much closed.

We ended up dining at a convenience store with sandwiches heated in a microwave, and found accommodations for a small ransom at the Lexington at Jackson Hole. The hotel is actually in Jackson, but has Jackson Hole in the name. We found our way into a lovely suite complete with luxury bath and full breakfast the next morning. I highly recommend it, but not as a last resort because all other rooms were booked. The cost was a bit more than I'm used to spending.

We completed our adventure in this part of Wyoming with a full breakfast at the Lexington. It was quite good and we had seconds. Leaving the comfy quarters behind, we made our way to Teton Village where we enjoyed a trail ride in the lower Tetons before making our way back to Teton Village for lunch at the Mangy Moose.

Our ride was a wonderful way of experiencing the Grand Tetons. We saw large red-tail hawks, and a couple of red foxes during our ride.

We had dinner at the Mangy Moose in Teton Village. The atmosphere was great, but the food was way overpriced by our budget. Three burgers and fries nearly $80. Plan accordingly.

I highly recommend seeing Yellowstone and the Grand Tetons. If you have time and like horseback riding. The stables at Teton Village are a great opportunity. Our guide Called did a great job and kept us all safe and pointed out lots of interesting sights as went made our way along the route.

Until next time - keep wandering!