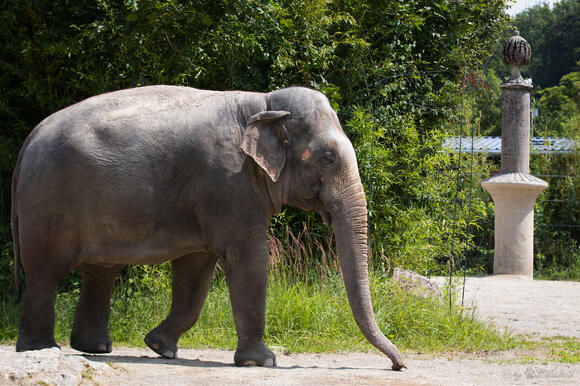 We know Erwin for hanging an elephant on September 13, 1916. The pachyderm in question was Big Mary. She was an Asian elephant who killed a novice trainer, who'd only worked as a trainer two days before put with her. The trainer was Red Eldridge. Big Mary killed him on September 12, 1916, during a parade in Kingsport.

The parade was part of Sparks World Famous Shows - a traveling circus. Big Mary was his star attraction. After public outcry and the ordering of the elephant to be "put down, " shooting the animal and other methods proved unsuccessful.

Charlie Sparks, the owner of Sparks World Famous Shows, made another spectacle of the now "Murderous Mary". They would publicly execute Mary.

The only location which could accommodate the hanging of such a large animal was the Clinchfield Railroad Yard in Erwin, Tennessee. In the Erwin yard was a large train derrick capable of lifting the animal. It was made to lift locomotives and train cars. Records say 2,600 turned out to watch the public hanging - including much of the town's children.

The derrick lifted the elephant clear of the ground. The first attempt snapped a chain, resulting in her falling and breaking a hip. A second attempt with a larger chain lifted her free from the ground, where she hung thirty minutes until she was dead.

A steam shovel dug a hole roughly 400 feet from the location. Big mary was reportedly buried there, just out from the old train station. The library sits there today. Could the parking lot cover Mary's final resting place? The town has not shared the final resting place of the animal, and has not placed a marker indicating she was there.

A century later, Erwin continues to live down the event. Many who hear of the event would blame the town for Mary's gruesome death.

Ironically, CSX who now owns the railyard and maintenance shop once operated by Clinchfield Railroad, closed the yard the year before the 100th anniversary of the hanging. The closure was related to a downturn in rail activity on this line, with coal trains decreasing amid the economic climate.

The town acknowledges the event took place, yet there is not anyone here who would condone such actions today. The community and townspeople appear ashamed of the event. The locals have finally decided to take action.

Erwin is now a proud supporter of The Elephant Sanctuary in Tennessee. The town generates revenue with the help of local artists and RISE Erwin. On the 100th anniversary of Mary's death, they began the Erwin Elephant Revival. The revival raises both awareness of Mary and funds to support the middle Tennessee sanctuary.

The sanctuary was established in Middle Tennessee in 1995. The location provides enough variation in climate throughout the seasons to vary the foliage for the elephants diets.

According to their website, the sanctuary has provided refuge for 28 elephants who are retired from zoos and circuses. Currently 10 elephants reside there. The Elephant Sanctuary in Tennessee began on 110 acres and has grown to three separate and protected, natural habitats, spanning over more than 2,700 acres.

﻿﻿﻿The sanctuary provides retired from elephants (entertainment and exhibition animals) with a herd to socialize, a home habitat, and individualized care for life. The preserve is a true sanctuary, with no public tours or visits. It isn't a zoo. Those interested in the elephants can see them via cameras in the preserve from the comfort of their own homes.

The one in Tennessee cares for females, though they have cared for one male. For more information, check out their website at https://www.elephants.com.

Would you toss your cookies for a fruit cake?

Sugar cookies are the top desssert for Christmas in the USA. Fruitcakes, not so much. Is it time for fruitcake to die? I think not. While it's waning popularity comes from the litany of bad jokes and euphamisms about the desert, some of it is well deserved. The colorful holiday treat most of us are familiar with, is identified as Christmas Tree colored fruit-laiden brick. Some people would say it is more useful as a door stop or paperweight than as an edible dessert.

Officials at the Raytheon plant of Bristol, Tennessee, were called to investigate a fluorescent green discharge apparently emanating from the Bristol plant. Whitetop Creek, flowing through the plant operating in conjunction with the U.S. Naval Sea Systems Command, had turned fluorescent green at one point during the summer of 1982. Plant and government officials investigated the discharge after receiving multiple complaints downstream of the plant.