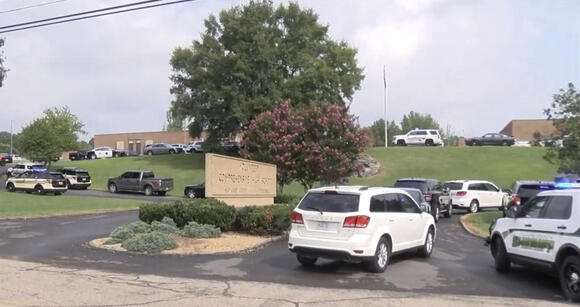 Just after 7:50 a.m. today, Hawkins County officials received a call from someone claiming to be armed and in the main restroom at Volunteer Comprehensive High School in Church Hill, Tennessee.

Law enforcement and school officials had students sheltering in place. They directed those arriving late to the Armed Forces Center in Mount Carmel, using it as a reunification center for students and parents.

On arrival, police began a systematic search of the building and grounds. Police evacuated students in groups, placing them on buses for transportation to the center in Mount Carmel. There, school officials would account for everyone before releasing them to their parents. Hawkins County and Sullivan County EMS checked students on arrival to verify they were uninjured.

Police evacuated students, having them form lines and walk with their hands over their heads to buses as a safety precaution for all involved. The hands-up walk is used to prevent anyone from trying to blend in while carrying a weapon.

"Other schools locked down temporarily as a precaution. The search will likely continue through the end of the school day, but we expect classes to resume in the morning. We’ve been through COVID and a lot of closure and our intent is to keep students in school and keep them learning." -Matt Hixson, Director of Schools in Hawkins County

Hawkins County EMS Director, Jason Murrell, states two people were transported from the school. Both of which suffered from medical conditions - not affilliated with any physical trauma. Murrell directed the medical response efforts from the Unified Command center, established at the Church Hill Fire Department station on Highway 11-W.

Sullivan County and Hawkins County EMS units were pulled out of the staging area a few times to respond to other 9-1-1 calls in the area.

Hawkins County Sheriff, Ronnie Lawson, announced at a news conference - just after 11 a.m., that students have been evacuated from the school and at present no victims or suspects have been located. Lawson believes the call to be a prank.

Lawson continued to emphasize they would continue searching the area. Schools were expected to resume classes on Wednesday. The Tennessee Bureau of Investigation is assisting Hawkins County Sheriff's Office and Church Hill Police Department in the investigation. They plan to identify the source of the call and caller reporting the false call.

In a statement from the Hawkins County Sheriff's Office on Facebook, posted at 6 p.m., the Sheriff states "numerous agencies from surrounding counties responded to assist in the search effort and the evacuation of students. After a thorough search was conducted, no threat was located.

At this time, it appears this was a hoax. The Hawkins County Sheriff’s Office is working alongside the Church Hill Police Department and the Tennessee Bureau of Investigation to determine where the call originated. The investigation remains ongoing.

We appreciate the assistance of the multiple agencies who responded to assist.

Drawing New Lines - How the 2020 Census Will Affect Tennessee

Autumn is officially here, and it came in with a bang this year. A cold front blowing through dropped the temperatures to seasonal lows after a few monsoons made their way across Northeast Tennessee. It finally feels like fall too. Football time in Tennessee is much more enjoyable with a touch of chill in the air.