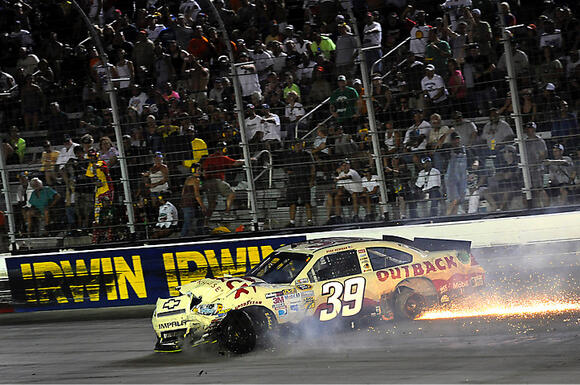 Grandstand capacities are back to normal for the hottest ticket in NASCAR - The Bass Pro Shops NRA Night Race.

The Bass is back

We're counting down to the 61st running of the Bass Pro Shops NRA Night Race. This September 16-18, the hottest ticket in NASCAR will be back in force. The colossal event is a beacon of patriotism, freedom, and American pride. The Bristol Motor Speedway is hosting its 60th anniversary season, in what is sure to be a weekend worth remembering.

Post-pandemic type safety protocols will be in place, as recommended by the CDC. The Bristol Motor Speedway will see the minimal, but necessary safety standards are kept. They will also see the BMS venue is wide-open for maximum capacity. The event capacity for fans is wide open.

Get out and live a little

Race fans are ready for this opportunity to escape what has become the current reality. BMS is prepared to let them be absorbed in the great outdoors with the most talented drivers and teams on the NASCAR circuit on The World's Fastest Half-Mile.

BMS officials say "this year’s edition of the tradition-rich event will offer an extra injection of maximum post-season adrenaline during each night of racing. All three of NASCAR’s major touring series racing Bass Pro weekend will have Playoff implications swirling around their finishes. Fans should expect nothing less than bruised egos, smashed fenders, incredible triumphs and sparks flying under the lights at The Last Great Colosseum."

Here is the lineup:

NASCAR Camping World Truck Series will showcase its first Playoff cut-off race with the UNOH 200 presented by Ohio Logistics. The Playoff field will be reduced from 10 to 8 drivers once the checkered flag falls.

NASCAR Xfinity Series will finalize its Playoff roster during the Food City 300. Once the checkered flag waves the 12 Xfinity Playoff eligible drivers will be identified and locked into the post-season.

The Bass Pro Shops NRA Night Race will present the first cut-off race for the Cup Series drivers. The Playoff field will be reduced from 16 to 12 drivers by night’s end.

Who will emerge with a hard-earned victory, and claim the coveted BMS Gladiator Sword?

The Bass Pro Shops NRA Night Race should be a national holiday for the NASCAR Nation. One of the reasons America’s Night Race easily qualifies as a national holiday is because it’s all about fun. Long known as a premier bucket list destination for many, including fans from all 50 states, the race weekend – even during the final stages of a global pandemic – will continue to provide one of the grandest celebrations of family, fun, patriotism and speed that one can imagine.

Fans who want to be in on the first unrestricted, open event at Bristol Motor Speedway in more than two years should act fast to get their tickets. Demand is at an all-time high and the historic race weekend is positioned to be one of the biggest crowds in BMS history.

You may not here it often enough anymore, but Bristol is - "Racing The Way It Oughta Be!"

Are You Prepared for Changing Times? Beware of the Darkness

We welcome the end of daylight saving time (most of us) more than when it starts. When Daylight Saving Time ends in the fall, we set out clocks back (for those of us who aren't dependent upon self-adjusting time pieces), and enjoy our bonus hour of sleep. Change in our sleep schedule (patterns) are always difficult - whether they are due to shift work, or other means. For other people, it's the beginning of season depression - Seasonal Affective Disorder (SAD).

What are you doing for Halloween? That is becoming the question everyone is asking their friends. It's as if nobody is sure what they are supposed to be doing for the holiday. Has it been that long?

Are Tennesseans Hunting for Meat? Experts Warning More Shortages Are Due to Supply Chain Crisis

Elk in Rocky Mountain National ParkJohn Dabbs/Photographer. Our economy has changed. Just-in-time supply chain management is a victim of next-day deliveries becoming day-after-next delivery. Car parts and other items to repair machinery and appliances are taking more than a day - sometimes weeks, just to receive parts. You may have new home improvements scheduled with your next round of down-time, or plan to hire it done with your latest round of pigeon-holed stimulus funds - if you can find a contractor.