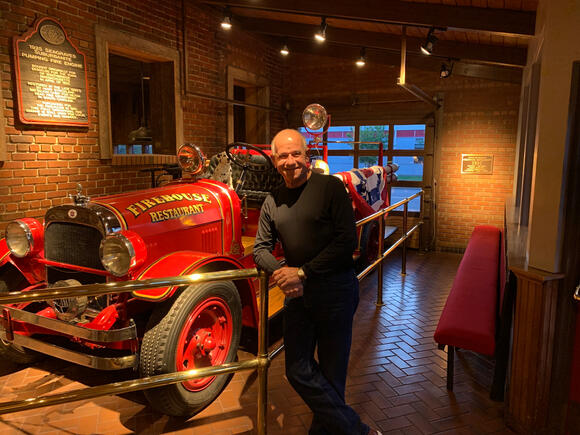 This EMS Week, I had dinner with Ken Bouvier - former EMS Operations Chief of New Orleans EMS (NOEMS). We ran into Bouvier at the Holiday Inn Hotel & Convention Center. He is presenting this week at the Northeast Tennessee Emergency Medical & Rescue Conference.

Bouvier likes barbecue, so we made our way to the perfect location for an old "fire dawg" - the Firehouse Restaurant. The former Walnut Street Fire Station is home to Johnson City's best for barbecue and firehouse memorabilia.

Dinner with a Cajun

My wife and I had the pleasure of dining with Ken Bouvier this evening. The cajun paramedic chief is great company had many stories to tell. His southern charm and warm smile make anyone quickly feel at ease around him.

Bouvier enjoyed the food and atmosphere at the Firehouse Restaurant on West Walnut Street. His fire and EMS background gave the appropriate nod to the keepsakes displayed on the walls. We explained the building was an actual fire house - turned restaurant.

Bouvier tells us his home has many of the same firehouse decorations as found in the main dining area. He also has a mural on one wall from the movie "Backdraft" with the fireman running into the fire - and another on the opposite wall with him in the same pose, in his turnout gear running into a fire.

Over dinner he regaled us with tales of EMS in New Orleans after Hurricane Katrina, and how they didn't have a station to work out of - using fire stations to clean out the ambulances at night.

We also learned he enjoys camping with his wife of 47 years... and a few tales he had to share related to camping. There were also a few tales related to his speaking engagements across the country - that I won't get into.

As with most all EMS professionals, Ken Bouvier is a people person. He enjoys interacting with others and helping them when he can. Whether it be giving a candy treat to a child or a bicycle to a kid, they can all be rewarding experiences.

It was apparent as I dropped Chief Bouvier off at his hotel, we'd not entertained him nearly as much as he entertained us. His demeanor and personality remain constant whether speaking to a crowd, or one on one.

Ken Bouvier continues to serve fire and EMS as subject matter expert and professional speaker. He currently works according to his own schedule - accepting speaking engagements and other work on his own terms.

He has been offered numerous positions before he retired from NOEMS. He receives them to this day. On our way to dinner, he told about running into a man at the airport in Atlanta, who reminded him about a job. He approached Bouvier to offer the job to him again.

Chief Bouvier is known both nationally and internationally as a professional EMS speaker. He is also a Nationally Registered Paramedic. He retired in 2012 after serving 37 years with Monsanto, where he served as an industrial firefighter until being promoted to Fire Chief and Global Hazardous Materials Team Leader in 1982. He served in that position until he retired from Monsanto.

A glutton for punishment, Bouvier also worked as a paramedic for New Orleans EMS while at Monsanto. Upon retirement from Monsanto he began working full-time for New Orleans EMS, where he served as the Deputy Chief of Operations. He continued in his role at New Orleans EMS until he retired there in March of 2019 - another seven years in emergency services.

While serving as Deputy Chief of New Orleans EMS Operations, Bouvier was the incident commander of most major events, including Mardi Gras.

Chief Bouvier's background in fire and EMS has allowed him to contribute to at least 14 EMS texts. He serves on the EMS World Editorial Advisory Board (since 1998).

Bouvier continues to serve both fire and EMS as a professional speaker and educator, and serves his hometown volunteer fire department as Hazardous Materials & Medical Officer (Westwego Volunteer Fire Department).

Chief Bouvier (retired) is in town this week as one of two keynote speakers for 25th Anniversary of the Northeast Tennessee Emergency Medical and Rescue Conference. Attendees receive continuing education on the latest procedures and techniques on emergency medical care, rescue, and mass casualty operations.

Bouvier will speak on responding to and handling School Bus incidents and preparing for multiple-casualty incidents. The theme of many of his lectures revolve around whether agencies (and a region) are truly prepared - and know what to expect.