Bristol Circles Back to the Blue 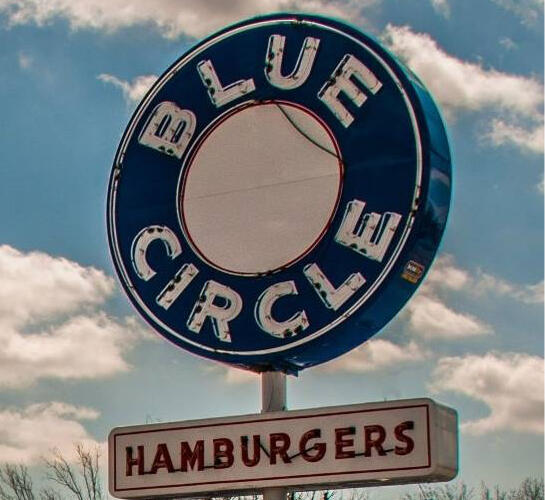 The Blue Circle closed in July 2019 when owner Michael Hunt reported he'd just received an "unrealistic bill" (Bristol Herald Courier 8/3/2019). The iconic drive-in/eat-in restaurant on the Bluff City Highway has been a landmark in Bristol since 1964.

A tale of survival

Mark and Debbie Sourbeer announced their purchase of the Blue Circle on August 16, 2019. Since then, they've put a lot of hard work and money into the business into the business to resurrect sales. It continues to be a local favorite, even though the Volunteer Parkway's completion many years ago redirected much of the city's traffic that once flowed by the restaurant.

Homer Longmire started the Blue Circle franchise in Knoxville, Tennessee in 1931. Longmire sold franchises across Tennessee, Alabama, and Virginia. At its peak, there were over 30 Blue Circle restaurants.

The house specialty was a grilled burger with diced onions and mustard, served on a steamed bun. The Blue Circle motto was "a happy place for hungry people." The original store served breakfast and baked goods from Blue Circle Bakery, and offered walk-in, drive-in, and phone-in service.

Longmire sold the chain to Wometco of Miami, Florida in 1966. New stores opened after the sale, but difficulties at Wometco led them to sell to Enroc Co, of Michigan in 1974. By 1975, on 17 restaurants were in operation. Enroc Co declared for bankruptcy and liquidated all remaining assets, except for the Bristol location. The Bristol, Tennessee location is the only known store still in operation.

The Bristol location has experienced its own ups and downs, changing hands a few times in recent years. Bart Long and Todd Buchanan bought the business in 2012. They purchased the Sammons drive-thru restaurant in Elizabethton on Highway 19E, to open a second location in 2015 - but it didn't pan out.

Bristol resident, Michael Hunt, obtained the Blue Circle in 2017. He'd eaten at the Blue Circle many times during his life. He said "I grew up with the Blue Circle." Hunt closed the Bristol location suddenly due to an unexpected utility bill with food in the kitchen. It was ready for the next buyer who could make an acceptable offer to quickly resume operations.

The Sourbeers bought the restaurant shortly thereafter, and have continued to make improvements to the facility as Long, Buchanan, and Hunt did.

The staple of the Blue Circle is the Circle Burger. If you're familiar with Krystal Burgers, or White Castle, you'll be able to identify with the diner version that most likely came about the same time. The roll-sized bun is steamed and topped with grilled minced onions over a finely ground beef square. They top it off with a slice or two dill pickle and mustard.

The simple culinary delights are basic diner food. They offer a good breakfast too. Basic omelts, fried eggs, bacon, sausage, hashbrowns, etc.. they can all be had here for a reasonable price.

Keep in mind, it's not fast food - and is made to order. It's basic diner cuisine, with daily specials.

The location has seen a few upgrades during COVID-19. They've removed a few of the drive-in spots near the bathrooms and front door to add covered outdoor dining tables. The drive-in stalls are still adequate to meet most demands, thought the small dining room inside is usually full except during off-hours.

You'll find push-button intercoms on the stalls now instead of the handsets, once used to order food. The audio quality is better, though the volume still is a bit low for those of us who are getting a little hard of hearing.

It may not be a National Landmark or have any value to others, but It remains a Bristol icon that I like to frequent when I'm in the area at breakfast or lunchtime. Situated next to Bristol's Putt-Putt Golf Course, it's the perfect place to stop before a putting excursion with a date or your family.

I'm glad the restaurant continues to survive and has been to able to survive the pandemic. We all need a quaint hometown place to eat at times.